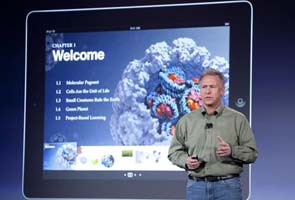 Highlights
Apple is taking aim at the textbook market.

The California-based gadget-maker unveiled a free iBooks 2 application for the iPad on Thursday that brings interactive textbooks to the popular tablet computer.

"Education is deep in Apple's DNA," said Philip Schiller, Apple's senior vice president of marketing. "With iBooks 2 for iPad, students have a more dynamic, engaging and truly interactive way to read and learn."

He said the iPad is "rapidly being adopted by schools across the US and around the world" and 1.5 million iPads are already being used in educational institutions.

At a press conference at the Guggenheim Museum in New York, Schiller and other Apple executives showed off the interactive animations, diagrams, photos and videos available in the iBooks textbooks.

"The iBooks 2 app will let students learn about the solar system or the physics of a skyscraper with amazing new interactive textbooks that come to life with just a tap or swipe of the finger," it said.

Most of the high school textbooks in Apple's iBookstore will cost $14.99 or less, Apple said, far cheaper than the current prices for print textbooks.

Apple also unveiled a free tool called iBooks Author which allows Macintosh computer users to create their own iBooks textbooks and publish them to the iBookstore.

Amazon and others have been seeking to tap into the market for digital textbooks but Forrester Research analyst Sarah Rotman Epps said iBooks 2 and iBooks Author will "democratize the publication and distribution of content."

"We'll see an avalanche of new companies and new content for the education market -- and many of the best innovations will come from these smaller companies, not the biggest publishers," she said.

According to Forrester, electronic textbooks currently account for only 2.8 percent of the $8 billion US textbook market.

Apple on Thursday also announced a new iTunes U application for the iPad, iPhone and iPod Touch that helps teachers create courses and offers free educational content for students from dozens of universities, including Cambridge, Duke, Harvard, Oxford and Stanford.

"Never before have educators been able to offer their full courses in such an innovative way," Eddy Cue, Apple's senior vice president of Internet software and services, said in a statement.

"The all-new iTunes U app enables students anywhere to tap into entire courses from the world's most prestigious universities," Cue added.
Comments