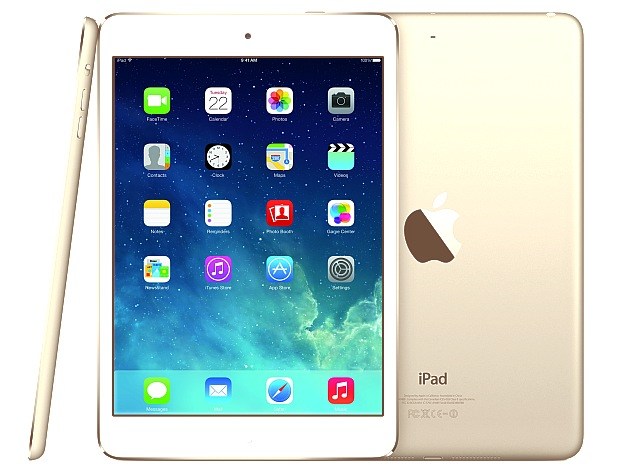 Apple, which is expected to unveil the anticipated new iPad Air model, the iPad Air 2, at its rumoured October 21 event, may finally introduce a Gold colour variant for the tablet, according to a new report.

Interestingly, the reports are only focussed on the new 9.7-inch iPad Air models while the iPad mini goes without mention, as per sources close to company's plans to Bloomberg.

The rumoured introduction of the gold back cover for Apple iPad Air 2 would bring its colour palette in line with the iPhone 5s handset, which comes in three colour variants of Space Gray, Silver and Gold.

If the rumours from earlier this year are to be believed, the iPad Air 2 would include a Touch ID fingerprint sensor and would be around 1mm thinner than the existing iPad Air tablet. Also, the speaker grills on the bottom might be changed to bigger circles in one row from the smaller circles in two rows.

The company is also expected to use the new Apple A8X processor on the iPad Air 2 alongside 2GB of RAM, supposedly meant to enable its split-screen functionality - which has been widely-anticipated.

Apple is also expected to roll out a larger, 12.9-inch version of its iPad for 2015, with production set to begin in the first quarter of next year. The rumoured 12.9-inch iPad Pro might only launch sometime in the second quarter of 2015, probably after the anticipated Apple Watch launch, as per the reports.

In the meanwhile, Samsung is reportedly gearing up to provide its rival 9.7-inch and 12.9-inch iPad panels, reports Digitimes. While Samsung is said to ship the panels in the second half of this year, LG Display's small sized panels are already being shipped to Apple for iPhone 6 and Apple Watch.

The recently announced OS X Yosemite, along with the new Mac Mini, is also anticipated to be launched at the October event.