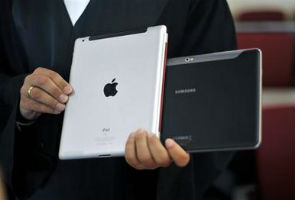 The repercussions of Apple's billion-dollar patent victory over Samsung were still being felt at Europe's biggest consumer electronics show, as the South Korean firm launched a host of new gadgets.

After losing the biggest patent case in decades, Samsung came out fighting at the IFA show in Berlin which opens on Friday, with a sweeping media launch of smartphones, tablets, a "smart PC" and a voice-controlled camera.

But as Samsung made every effort to shrug off the defeat with a dazzling array of new toys, there were concerns the court case could stifle innovation as firms fear to launch new products that could be the target of patent suits.

"Behind closed doors, you can be sure that there will be serious discussions taking place, device makers talking to different platforms makers," said Florian Mueller, an intellectual property expert.

"There will be private meetings in which it will be a big issue," he added.

"An overprotected market can stall innovation and infringe competition ... We are not there yet, but we have to keep an eye on this," he said.

"For the moment, I don't fear a lack of competition," said Mueller, although he believed high-tech manufacturers would be wary of the power of the patent courts in future.

Juergen Boyny, from consumer affairs think tank GfK, said the "tablet war" between Apple and Samsung -- which forced the South Korean firm to pull one of its products out of last year's show -- was a "limited conflict."

"It will not stop the development of innovation, nor will it stop smartphone or tablet sales," he told AFP.

"Everyone at the moment is developing tablets."

Indeed, IFA organisers say the global market for consumer electronics is poised to defy the economic slowdown and post a two-percent gain this year to around $1.1 trillion.

"It's innovation that drives growth," said Rainer Hecker, the president of the German federation that organises the IFA.