An iPad is a dog's best friend 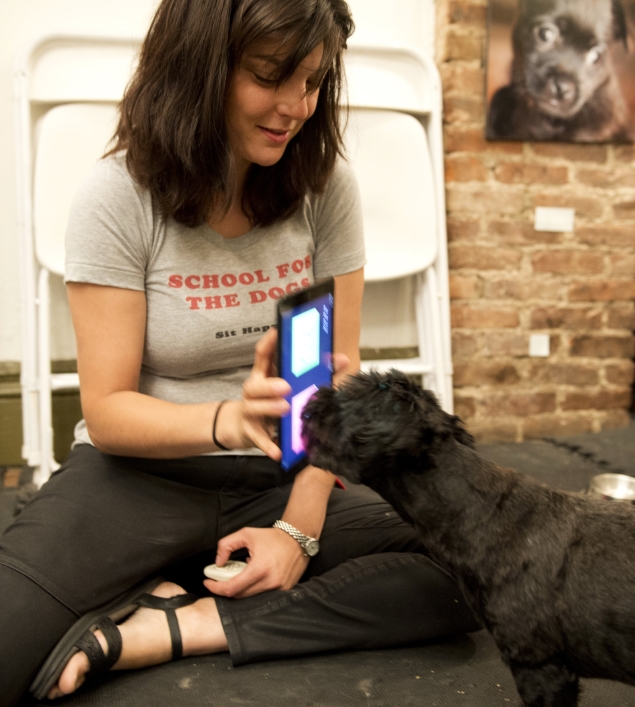 You may or may not be able to teach an old dog new tricks, but you can certainly try to get Fido to use an iPad.

New York dog trainer Anna Jane Grossman has done just that, with success although a lack of apps limits the possibilities.

"It's a novelty. It's just sort of a fun thing to do," Grossman told AFP at School for the Dogs, the canine classroom she runs with partner Kate Senisi near Manhattan's Union Square.

"There's not a huge amount of purpose to it but the way I see it, we're playing games all the time on our iPads anyway, so why not play games with our dogs?"

Grossman, a native New Yorker and lifelong dog lover who's also a freelance writer, was inspired by a fictional news article about a college grad who instructs dogs on correct tablet technique.

The original real-life iPad dog was Grossman's eight-year-old poodle-Yorkie mix Amos, whose rich repetoire of silly tricks such as rolling over dead upon hearing the words "bang bang."

In the interests of objectivity, AFP brought its own dog, a three-year-old dachshund mix, down to Grossman's place to see if she could turn him into a genuine geek on four legs.

Starting off simply, Grossman got Bandit to touch her hand with his nose on command, in return for a tasty treat as a reward for correct behavior.

From there she got the dog nudging a fly swatter, then a pad of Post It notes, occasionally using a smear of peanut butter to focus its attention.

Then came the iPhone and iPad no doubt Android devices work just as well with their touchscreens reacting instantly to the gentlest pressure from a wet canine nose.

"We go through a lot of screen cleaner here," Grossman confessed.

Within an hour, Bandit could take a self-portrait on command, using an app called Big Camera Button that triggers an iPhone camera shutter just by touching the screen. (The resulting image was an extreme close-up of his eyes and forehead.)

"What's nice about the iPad or iPhone or whatever you're using is that it registers that moment that (the dog) touches it," Grossman explained.

With an app called YesNo, with a green yes button and red no button, Grossman can get Amos to answer the most profound questions ("Does two plus two equal five?" No! "Is print media dead?" No!.

Designed to help nonverbal youngsters communicate with others, YesNo is one of the few reactive touchscreen apps that Grossman has come across with crossover potential.

"The problem isn't so much what dogs are capable of doing," said Grossman, author of a book on obsolete technology.

"It's that there aren't a lot of apps out there that are both big enough for a dog to touch with his nose and synched up for practical purposes," such as switching on a light or opening a door.

That said, Grossman has been experimenting on getting a seeing-eye dog to differentiate between dark and light pairs of socks so it can help its owner get dressed, using an audio-enabled app.

Another client is a pilot who wants his dog, on command, to nose-touch his iPad in just the right spot in order to summon the latest in-flight weather report.

Having rigged a litter box with a motion sensor to send a text message every time her cat does its business, Grossman is tinkering with synchronizing an iPad with a doggie treat dispenser.

Along the same lines, Pavlov Dog Monitor, an app released earlier this year, uses a smartphone's audio sensor technology to send a Facebook message every time it hears a home-alone dog barking.

"A lot of service dogs are trained to touch buttons in case of an emergency," so it shouldn't be too much of a leap for them to do same via a smartphone or tablet screen, Grossman said.

But while more and more people hear about dogs using iPads, not everyone is impressed.

"In the dog training community, people have been, like, 'That's so cool'," said Grossman, whose school now is offering "iDog" seminars.

"But I've also gotten a lot of angry emails from people saying, like, 'Steve Jobs must be rolling over in his grave'."