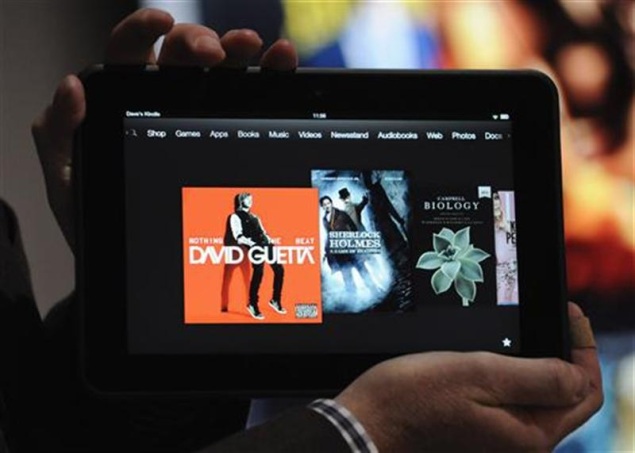 Amazon.com Inc said on Wednesday it cut the price of its largest Kindle Fire tablet, part of an effort by the world's biggest Internet retailer to get the device into the hands of as many consumers as possible.

Amazon is launching its larger tablet in the UK, Germany, France, Italy, Spain and Japan. Dave Limp, president of Amazon's Kindle business, said the company has increased production of the devices in conjunction with the overseas launch. The cost of making the tablets has fallen with greater economies of scale, letting Amazon cut prices, he said.

"Whenever we are able to create cost efficiencies like this, we want to pass the savings along to our customers," Limp said in a statement.

Amazon launched its first Kindle Fire tablet in 2011 to compete with Apple Inc's dominant iPad and other tablets from companies such as Samsung that run on Google Inc's Android operating system.

Amazon sells its devices at cost, undercutting Apple prices. Amazon aims to make money when customers use its tablets to buy physical and digital products from the company, such as movies, music, games and apps.

However, Amazon's strategy rests on selling a lot of tablets. This may not be working well yet for its larger 8.9 inch Kindle Fires, according to recent research by Chad Bartley, an analyst at Pacific Crest Securities.

Amazon does not disclose device sales numbers. But Bartley said in a research report last month that demand for the larger Kindle Fire tablet was weak, citing checks with contacts in the device supply chain.

Amazon's price reductions on Wednesday may be designed to try to maintain sales during the early part of the year, which is typically a slow period for retail sales, said Colin Gillis, an analyst at BGC Partners.

Amazon may also be cutting prices before it comes out with new versions of its tablets later this year, when sales normally increase during the back-to-school shopping season and the holidays, Gillis added.

An Amazon spokeswoman said the price cuts were not driven by weak demand, but rather the cost benefits of increasing production for overseas sales.