To Tame Dashboard Chaos, Carmakers Take a Hint From Tablets 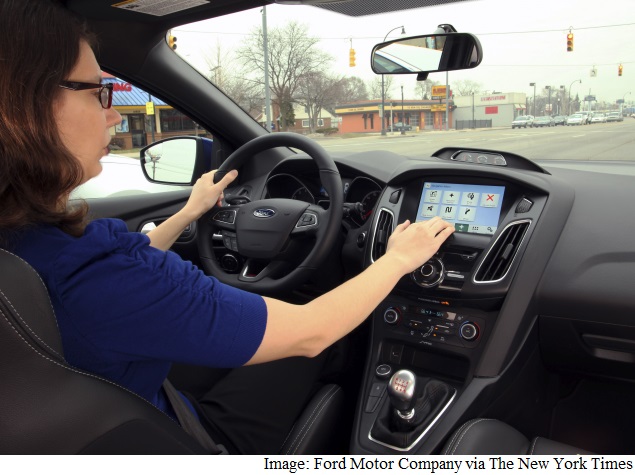 Reaching an apogee of confusion, car dashboards have become a bewildering array of screens, buttons and knobs to control functions like the radio, ventilation, advanced safety systems and Internet services.

Looking to simplify such cockpitlike controls, automakers are starting to take design cues from a familiar household gadget, the tablet computer.

Ford, for example, announced last month that it would adopt a new touch-screen, tablet like system to replace its much-criticized connected-car designs. It's a reflection of the radical transformation of vehicles as automakers wrestle with how to integrate smartphones and online services into cars without increasing driver distraction - and frustration.

"We looked at what aspects of tablets made sense," said Don Butler, Ford's executive director for connected vehicles and services, referring to the Sync 3, the next generation of the company's in-dash system, which will appear in models this year. Ford plans to offer Sync 3 across its entire line in the United States by the end of 2016.

It's a marked shift for Ford, whose seven-year partnership with Microsoft produced several systems that were often criticized for being too complex and balky.

The new system will be based on software from QNX Software Systems, a Canadian company with extensive experience in the automotive sector. Even though QNX is owned by BlackBerry, Ford took its inspiration for Sync 3 not from the parent company's smartphones, but from Apple's iPad.

Based on an 8-inch touch screen, Sync 3 uses fewer and larger icons that can be recognized at a glance. The touch-sensitive areas are bigger, and drivers can use more than one finger at a time, allowing for gestures like pinching to zoom in on a map. A bar along the bottom of the screen always displays primary functions like climate control, navigation and audio.

But moves that may be convenient for a tablet user lying on a couch can be deadly for drivers.

Tesla Model S owners, for example, can view a reverse camera angle of the car while driving forward, as well as view other information, all of it illuminated on a vast 17-inch touch screen.

"But the bigger size is better because it means the buttons can be larger," said Todd Lockwood, a Model S owner in South Burlington, Vermont. Lockwood said he could adjust braking and suspension settings while driving, which is easier on the big screen.

Conversely, Cadillac has been criticized for its iPad-like CUE system, which has a touch-sensitive slider to adjust the volume. Ford endured similar disdain from many drivers over a touch-sensitive volume button in some MyLincoln Touch systems.

To Ford, the message was clear: The volume knob stays.

Butler said that Ford was sensitive to the problem of driver distraction. So some common gestures common in tablets and smartphones are not migrating to the dashboard.

"When you scroll through a list, the list continues to roll normally on a tablet, but that inertial spinning is not ideal for a vehicle environment," Butler said. That move will not be in Sync 3 so that drivers do not become mesmerized spinning playlists, for example.

Ford said that it was keeping an eye on voluntary guidelines set in 2013 by the National Highway Traffic Safety Administration, which recommend that any single interaction not take more than two seconds. In that time, a car can travel 176 feet at 60 mph.

One of the most anticipated new touch-screen systems is coming from Volvo, which has made safety one of its biggest selling points. The centerpiece of its new XC90 sport utility vehicle, coming early this year, is a new connected-car system that has a 9-inch touch screen.

"Everybody's used to touch screens," said Thomas Muller, Volvo's vice president for electrical and electronic systems engineering. "You see them in modern kitchens; simple laptops come with a touch screen. It's become mainstream and a normal thing to do."

As a result, there will be only eight buttons in the Volvo system, including what the industry calls hard controls for front and rear defrost, skip track, pause and a mandatory hazard warning light switch. And, yes, there is a large knob that can control the volume.

Muller argues that because consumers are so accustomed to touch interfaces, it's the safest design for connected-car systems, with some caveats.

"Interactions on the screen should not lead to misinterpretation," he said, "because while driving it can be devastating."

So other ways of interacting with the system need to be deployed, like improved voice control. In the new Volvo system, drivers will be able to say, "I'm cold," and the heat will come on, Muller said.

One of the most positively reviewed connected-car systems of the last year has been the Chrysler brand's Uconnect, another QNX-based system. It uses an 8.4-inch touch screen in its top-of-the-line system. The graphics look less like a tablet, but the controls are simple and unembellished.

"When customers see a large screen, they think it provides an opportunity to touch and control," said Joni Christensen, Chrysler's head of global marketing, Uconnect systems and services. But there are also hard or physical controls for heat and air-conditioning and voice recognition that can switch radio stations or get a weather report.

"It helps people adapt to the new technology at their own pace," she said.

Andrew Poliak, global director of business development at QNX, said that different types of controls, like the volume knob, were needed for different tasks.

Not all automakers are embracing touch screens, including Audi.

Anupam Malhotra, Audi's senior manager for connected vehicles, said that rather than using a single iPad-like screen, multiple touch screens might be a better solution. (Audi is about to introduce its next-generation connected-car system, but would not say whether it will adopt a touch screen.)

Nevertheless, many automakers are clearly on a tablet track. What's less clear is how they will work with the companies behind those tablets. Nearly every car manufacturer insists it is working closely with Apple and Google, each of which will be promoting their own software CarPlay (Review) and Android Auto this year.

While that happens, the tablet revolution rolls on.