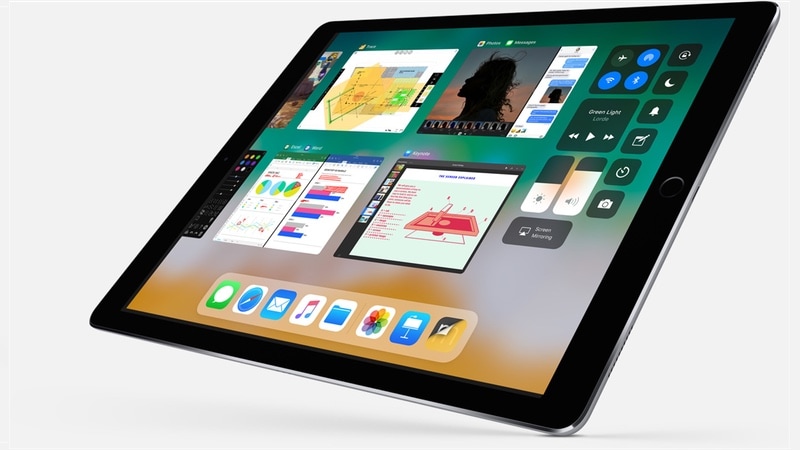 iOS 11 brings in lots of productivity oriented tweaks and the multitasking related features are chief among these. Apple has made it much easier to multitask on an iPad with iOS 11, and it has revamped the Dock to make it easier to access your favourite apps faster. You can now do things such as drag multiple pictures out of your photo album to the Messages app open side-by-side with Photos. If you have an iPad and would like to get started with multitasking on iOS 11, read on.

The iPad in particular has received several new features via iOS 11 and one of the best of these is the new Dock. For those who don’t know, the Dock is the strip at the bottom of your iPhone, iPad, or iPod touch. Apps you drag there will show up on all of your iOS device’s home screens, which means it’s a great place to house apps you use frequently.

The iOS Dock used to allow you to add four or six apps depending on your device. With iOS 11 and an iPad Pro 10.5-inch, you can add a whopping 13 apps to the dock (15 on iPad Pro 12.9-inch) and iOS places three more apps as intelligent suggestions based on your usage. All you need to do is start dragging your favourite apps to the dock to add them. The Dock has become a lot more useful too, but we’ll get to that in a minute.

iOS has slowly been moving towards Mac-like productivity and iOS 11 is a big step in that direction. The iPad gets much improved multitasking with iOS 11 and here’s how you can make access the new app switcher.

How to open two apps at once in iOS 11

One of the cool multitasking features in iOS 11 is that you can open two different apps at the same time to improve your productivity. For instance, you could open a browser and a writing app at the same time to quickly look up information online while writing. Here’s how you can do this.

Apps running side by side are grouped in the app switcher, which is a neat touch. You can group various apps in sets of two and switch between those to improve your productivity. For example, you could group YouTube and Notes, Netflix and IMDB, Fantastical and Mail, and so on. This way you could quickly switch between taking notes from a video to sending them across via email while checking if you have any upcoming meetings. You can even open a third app while two are open side by side, but that obscures a big part of one of those apps.

iOS 11 allows you to drag and drop multiple items at once. This means that you can select multiple photos and send them to Notes simply by dragging and dropping. The drag and drop feature supports multiple fingers so you can drag multiple photos out, drop them inside Notes, pull up the dock, open a third app and send in more photos there. Yes, you can use multiple fingers and get work done faster. Here’s how to use this feature.

This feature works just as well with other apps such as Mail and Messages. You can even use this to select multiple apps on your homescreen and drop them into a new folder.

Are there more Dock and multitasking-related tips you want to share? Let us know via the comments. For more tutorials, head to our How To section.