Sacha Baron Cohen, best known for his satirical characters Ali G and Borat, has penned an opinion piece for The Washington Post. 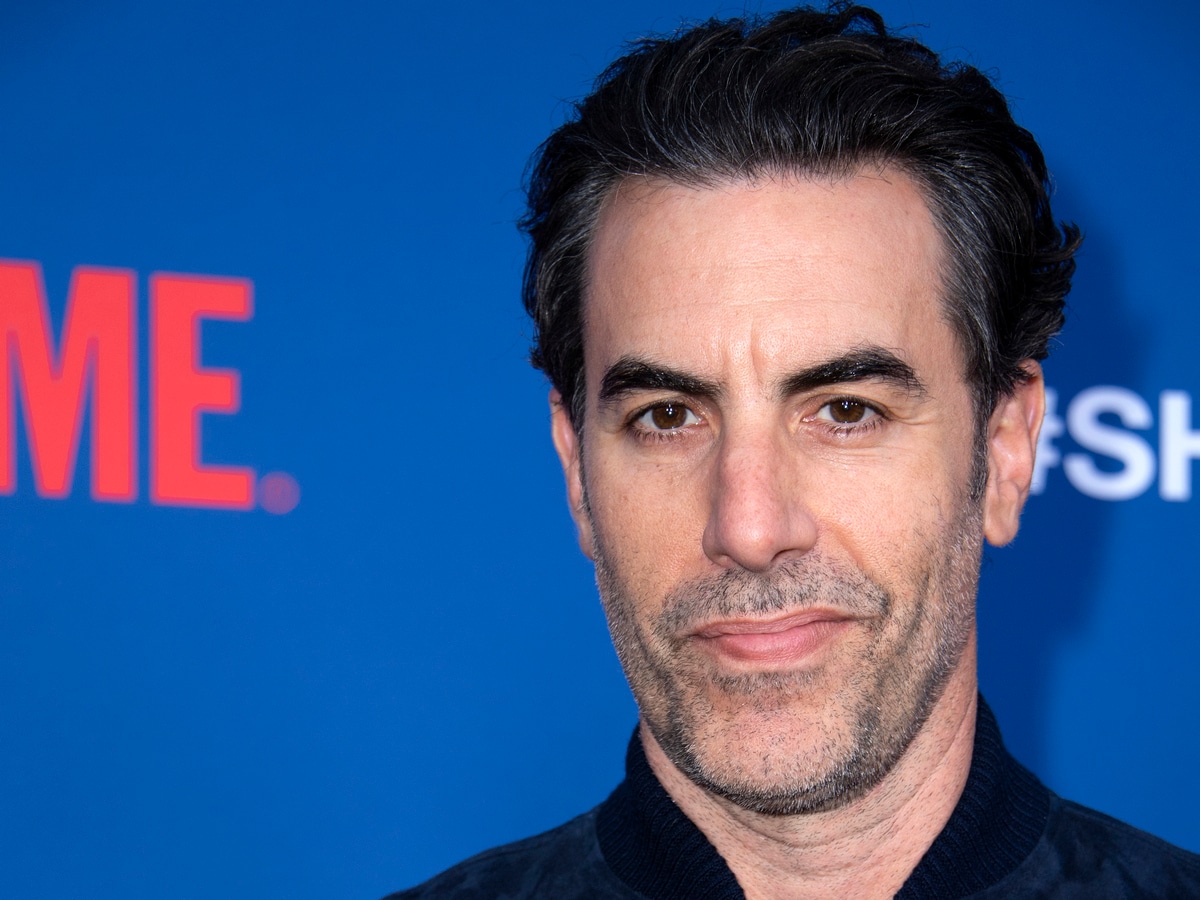 I get it: I'm one of the last people you'd expect to hear warning about the danger of conspiracies and lies. I've built a career on pushing the limits of propriety and good taste. I portrayed Borat, the first fake news journalist, along with satirical characters such as Ali G, a wannabe gangster, and Bruno, a gay fashion reporter from Austria. Some critics have said my comedy risks reinforcing old racial and religious stereotypes.

I admit that most of my comedy over the years has been pretty juvenile. However, when Borat was able to get an entire bar in Arizona to sing "throw the Jew down the well," it revealed people's indifference to anti-Semitism. When, as Bruno, I started kissing a man in a cage fight in Arkansas and nearly started a riot, it showed the violent potential of homophobia. And when, disguised as an ultra-woke developer, I proposed building a mosque in one rural community, prompting a resident to proudly admit, "I am racist, against Muslims," it showed a wide acceptance of Islamophobia.

The ugliness my jokes help reveal is why I'm so worried about our pluralistic democracies. Demagogues appeal to our worst instincts. Conspiracy theories once confined to the fringe are going mainstream, fueled in part by President Donald Trump, who has spread such paranoid lies more than 1,700 times to his 67 million Twitter followers. It's as if the Age of Reason - the era of evidential argument - is ending, and now knowledge is delegitimised and scientific consensus is dismissed. Democracy, which depends on shared truths, is in retreat, and autocracy, which thrives on shared lies, is on the march. Hate crimes are surging, as are murderous attacks on religious and ethnic minorities.

All this hate and violence actually has something in common: It's being facilitated by a handful of Internet companies that amount to the greatest propaganda machine in history.

Facebook, YouTube, Twitter and other social media platforms reach billions of people. The algorithms these platforms depend on deliberately amplify content that keeps users engaged - stories that appeal to our baser instincts and trigger outrage and fear. That's why fake news outperforms real news on social media; studies show that lies spread faster than truth.

On the Internet, everything can appear equally legitimate. Breitbart resembles the BBC, and the rantings of a lunatic seem as credible as the findings of a Nobel Prize winner. We have lost a shared sense of the basic facts upon which democracy depends.

When I, as Ali G, asked the astronaut Buzz Aldrin, "What woz it like to walk on de sun?" the joke worked, because we, the audience, shared the same facts. If you believe the moon landing was a hoax, the joke was not funny.

When Borat got that bar in Arizona to agree that "Jews control everybody's money and never give it back," the joke worked because the rest of us knew that the depiction of Jews as miserly is a conspiracy theory originating in the Middle Ages.

Social media platforms make it easier for people who share the same false premises to find one another, and then the technology acts as an accelerant for toxic thinking. When conspiracies take hold, it's easier for hate groups to recruit, easier for foreign intelligence agencies to interfere in our elections and easier for a country like Myanmar to commit genocide against the Rohingya.

Yes, social media companies have taken some steps to reduce hate and conspiracies on their platforms. Yet these steps have been mostly superficial, and the next 12 months could be pivotal: British voters will go to the polls next month while online conspiracists promote the despicable theory of "great replacement" that white Christians are being deliberately replaced by Muslim immigrants. Americans will vote for president while trolls and bots perpetuate the disgusting lie of a "Hispanic invasion." And after years of YouTube videos calling climate change a "hoax," the United States is on track, a year from now, to formally withdraw from the Paris agreement.

Unfortunately, the executive of these platforms don't appear interested in a close look at how they're spreading hate, conspiracies and lies. Look at the speech Facebook founder and chief executive Mark Zuckerberg delivered last month that warned against new laws and regulations on companies like his.

Zuckerberg tried to portray the issue as one involving "choices" around "free expression." But freedom of speech is not freedom of reach. Facebook alone already counts about a third of the world's population among its users. Social media platforms should not give bigots and paedophiles a free platform to amplify their views and target victims.

Zuckerberg claimed that new limits on social media would "pull back on free expression." This is utter nonsense. The First Amendment says that "Congress shall make no law" abridging freedom of speech, but this does not apply to private businesses. If a neo-Nazi comes goose-stepping into a restaurant and starts threatening other customers and saying he wants to kill Jews, would the restaurant owner be required to serve him an elegant eight-course meal? Of course not. The restaurant owner has every legal right, and, indeed, a moral obligation, to kick the Nazi out. So do Internet companies.

Zuckerberg seemed to equate regulation of companies like his to the actions of "the most repressive societies." This, from one of the six people who run the companies that decide what information so much of the world sees: Zuckerberg at Facebook; Sundar Pichai at Google; Larry Page and Sergey Brin at Google's parent company, Alphabet; Brin's ex-sister-in-law, Susan Wojcicki, at YouTube; and Jack Dorsey at Twitter. These super-rich "Silicon Six" care more about boosting their share price than about protecting democracy. This is ideological imperialism - six unelected individuals in Silicon Valley imposing their vision on the rest of the world, unaccountable to any government and acting like they're above the reach of law. Surely, instead of letting the Silicon Six decide the fate of the world order, our democratically elected representatives should have at least some say.

Zuckerberg speaks of welcoming a "diversity of ideas," and last year, he gave us an example. He said he found posts denying the Holocaust "deeply offensive," but he didn't think Facebook should take them down "because I think there are things that different people get wrong." This is madness. The Holocaust is a historical fact, and those who deny it aim to encourage another one. There's no benefit in pretending that "the Holocaust is a hoax" is simply a "thing" that "different people get wrong." Zuckerberg says that "people should decide what is credible, not tech companies." But two-thirds of millennials say they haven't even heard of Auschwitz. How are they supposed to know what's "credible"? How are they supposed to know that the lie is a lie?

When it comes to removing content, Zuckerberg asked, "where do you draw the line?" Yes, that can be difficult, but here's what he's really saying: Removing lies and conspiracies is just too expensive.

Facebook, Google, and Twitter are unthinkably rich, and they have the best engineers in the world. They could fix these problems if they wanted to. Twitter could deploy an algorithm to remove more white supremacist hate speech, but they reportedly haven't because it would eject some very prominent politicians. Facebook could hire enough monitors to actually monitor, work closely with groups such as the Anti-Defamation League and the NAACP and purge deliberate lies from their platforms.

But they won't, because their entire business model relies on generating more engagement, and nothing generates more engagement than lies, fear and outrage.

These companies pretend they're something bigger, or nobler, but what they really are is the largest publishers in history - after all, they make their money on advertising, just like other publishers. They should abide by basic standards and practices just like the ones that apply to newspapers, magazines, television and movies. I've had scenes in my movies cut or truncated to abide by those standards. Surely companies that publish material to billions of people should have to abide by basic standards just like film and television studios do.

Zuckerberg said social media companies should "live up to their responsibilities," but he's totally silent about what should happen when they don't. By now, it's pretty clear that they cannot be trusted to regulate themselves. In other industries, you can be sued for the harm you cause: Publishers can be sued for libel; people can be sued for defamation. I've been sued many times. But social media companies are almost completely protected from liability for the content their users post - no matter how indecent - by Section 230 of, get ready for it, the Communications Decency Act.

That immunity has warped their whole worldview. Take political ads. Fortunately, Twitter finally banned them, and Google says it will make changes, too. But if you pay Facebook, it will run any "political" ad you want, even if it's a lie. It'll even help you micro-target those lies to users for maximum effect. Under this twisted logic, if Facebook were around in the 1930s, it would have allowed Adolf Hitler to post 30-second ads on his "solution" to the "Jewish problem." Here's a good way for Facebook to "live up to" its responsibilities: Start fact-checking political ads before running them, stop micro-targeted lies immediately, and when ads are false, don't publish them.

Section 230 was amended last year so that tech companies can be held responsible for paedophiles who use their sites to target children. Let's also hold them responsible for users who advocate for the mass murder of children because of their race or religion. And maybe fines are not enough. Maybe it's time for Congress to tell Zuckerberg and his fellow CEOs: You already allowed one foreign power to interfere in US elections; you already facilitated one genocide; do it again and you go to prison.

In the end, we have to decide what kind of world we want. Zuckerberg claims his main goal is to "uphold as wide a definition of freedom of expression as possible." Yet our freedoms are not only an end in themselves, but they're also a means to another end - to our right to life, liberty and the pursuit of happiness. And today these rights are threatened by hate, conspiracies and lies.

A pluralistic democratic society should make sure that people are not targeted, not harassed and not murdered because of who they are, where they come from, who they love or how they pray. If we do that - if we prioritize truth over lies, tolerance over prejudice, empathy over indifference and experts over ignoramuses - maybe we have a chance of stopping the greatest propaganda machine in history. We can save democracy. We can still have a place for free speech and free expression.

And, most important, my jokes will still work.