US Senator Found Driving While Pretending to Work From Home During Zoom Call: See What Gave Him Away

The politician used a virtual background of his home office to conceal the fact that he was on the road during a Zoom meeting. 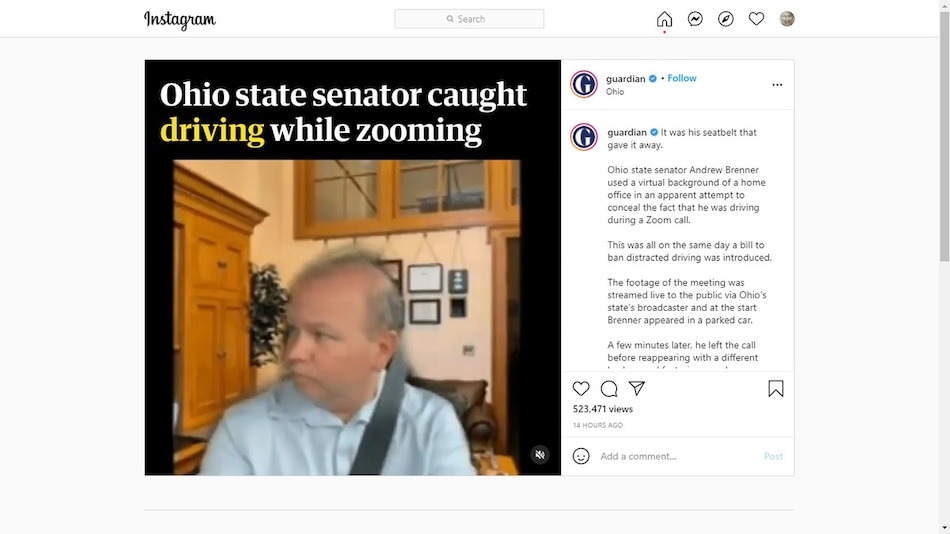 An Ohio state senator used a virtual background of his home office in an apparent attempt to conceal the fact that he was, in fact, driving while attending a Zoom meeting. The reason Republican Senator Andrew Brenner drew criticism from various quarters was the fact that the Ohio State Assembly had introduced a bill to ban distracted driving the very same day. Despite Brenner's attempt to show his car as a part of his house using a computer-generated background, a seatbelt across his chest, continuous movement of his hands and his attention to the left and right were enough for people to call his bluff.

Later, the senator defended his actions, saying he wasn't distracted, adding he was paying attention to driving and listening to the people at the meeting.

“I had two meetings that were back to back that were in separate locations. And I've actually been on other calls, numerous calls, while driving. Phone calls for the most part but on video calls, I'm not paying attention to the video. To me, it's like a phone call," he said.

As reported by The Guardian, at the beginning of the call, the senator was seen sitting inside a parked car. Minutes later, he left the call and reappeared with wooden cabinets, paintings hanging on the wall, and a house plant in the background.

Brenner continued listening and responding to questions while driving as the background flickered, momentarily giving the glimpses of the road he was driving on.

With House Bill 283, this is exactly what the Ohio state assembly wants to penalise. The new law proposes a ban on writing, sending, or reading texts, viewing videos or taking photos, live streaming and using apps on electronic devices while driving. The new law also makes holding an electronic device while driving a primary offence and permits the police to stop the driver.

Only voice-operated or hands-free use come under exceptions.

Ohio's Republican Governor Mike DeWine had last year said that the state's current laws weren't strong enough to change the culture of distracted driving, and people were dying because of it.

“Distracted driving is a choice that must be as culturally unacceptable as drunk driving is today, and strengthening our current laws will lead to more responsible driving,” DeWine had said last year.