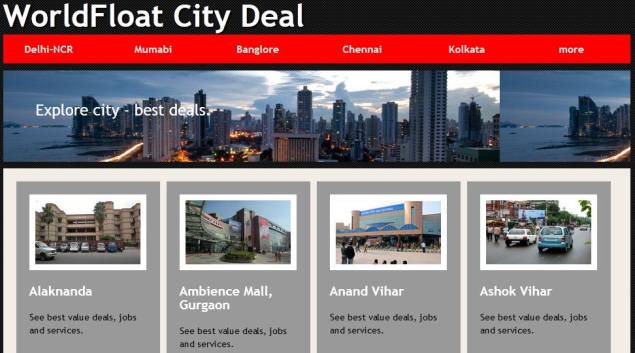 Social networking site Worldfloat says it has introduced an e-commerce feature taking on major players like OLX, Flipkart and Snapdeal in the Indian discount deal markets.

According to Worldfloat founder Pushkar Mahatta, the new feature, called Citydeals, would allow users to sell and buy products locally.

Initially the service will be available for five major cities - Delhi, Mumbai, Chennai, Kolkata and Bangalore.

Mahatta said the new feature is like Facebook feeds and would allow users to sell and buy products like cars, bikes, mobiles, real estate and a lot more. "Essentially, we have created a combination of Facebook, Flipkart and OLX by using a Facebook-like social feed."

He said for the benefit of users, major cities would be divided into colonies and have specific pages like Janakpuri in the Delhi page or Andheri West in the Mumbai page.

Mahatta said Worldfloat's new feature is unique and different because it comes free as the company would not charge users for buying and selling products. The monetising model will be advertisement-based.

"In Citydeals, people are allowed to buy and sell any product or service in five cities with Worldfloat not taking any cut in the business transaction," he said.

"I think a large revolution for the Internet of the future belongs to this idea of city deals where social media meets e-commerce or social plus e-commerce will take dominance over every other idea because making friends and making money are the most essential parts of our everyday life," he added.

"In Worldfloat Citydeals, we have combined both these ideas into one. We will soon be expanding in other cities of India and across the world," he said.

Worldfloat was launched in June 2012 as a social networking site. Since then it has added several new features like watching free online movies, free online education videos, comparison engine and search engine facilities.