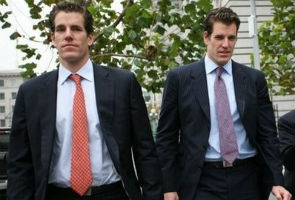 Highlights
Tyler and Cameron Winklevoss are taking their beef against Facebook co-founder Mark Zuckerberg to the US Supreme Court.

An attorney for the twin brothers said they will ask the top court in the nation to give them another shot at getting out of a deal they made, in a lawsuit charging that Zuckerberg stole their idea for the social network.

Attorney Jerome Falk Jr. said the Supreme Court is the next stop since the US Ninth Circuit Court of Appeals on Monday rejected a bid by the identical twin brothers to have a panel of 11 judges second guess a ruling made in April by a three-justice panel.

The three-judge panel said that litigation in the case "must come to an end" and threw out the bid by the Winklevosses to review the settlement.

Facebook said in a concise statement that it was pleased with the court's decision.

The Supreme Court, which is called upon when lower federal courts render conflicting decisions regarding points of law, would have the option of not hearing the matter.

An attorney for the twins has argued that Facebook held back information about the estimated value of the California-based social networking firm while reaching a $65 million dollar settlement with the brothers.

The twins inked a settlement two years ago that got them $20 million in cash and $45 million worth of stock valued at $36 per share.

The value of that yet-to-be-issued stock has skyrocketed along with Facebook's estimated market value, which was placed at $50 billion early this year.

The brothers challenged the settlement, which was supposed to be confidential, on the grounds that Zuckerberg suckered them during settlement talks by not revealing Facebook internally valued the stock at $9.

The lower figure would have resulted in the Winklevoss twins getting many more shares.

Facebook has said it was under no obligation to volunteer the stock option information during settlement negotiations and that the information was not intentionally withheld.

"The Winklevosses are not the first parties bested by a competitor who then seek to gain through litigation what they were unable to achieve in the marketplace," the three-judge panel said in their ruling.

"With the help of a team of lawyers and a financial advisor, they made a deal that appears quite favorable in light of recent market activity."

The Winklevosses claim they enlisted Zuckerberg to finish software code for their ConnectU social-networking website while they were all students at Harvard University in 2003.

Zuckerberg, a second year student at the time, took their code and their idea and launched Facebook in February 2004 instead of holding up his end of the deal, according to the brothers. Facebook rejects that account.

Hollywood made the saga famous in the hit film "The Social Network."
Comments