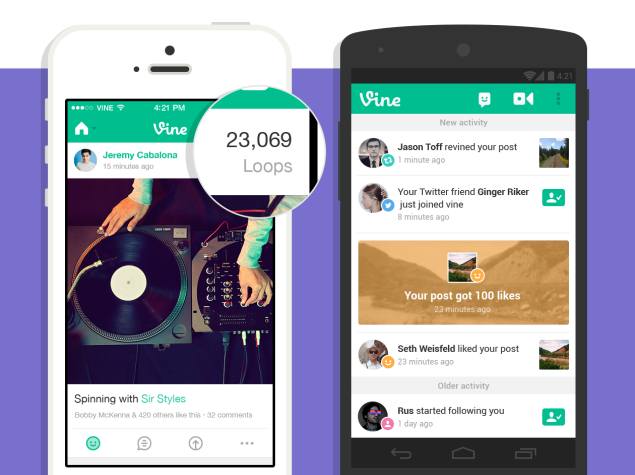 The Twitter-owned micro-video sharing service Vine on Tuesday has added a new 'loop count' feature to its website, Android and iOS apps. The feature reveals the number of times a video has been looped, including on Vine and via embeds across the Web, on the top right of each video.

The updated Vine app on Android and iOS version 2.1.0 can be downloaded via their respective app stores. The feature hasn't rolled out for Windows Phone users as yet, and the Vine app for Windows Phone is still on version 1.1.0.0.

"With this update, there's now a new way for you to quickly get a sense of how popular and interesting a Vine may be -- based on how many times people watch a Vine loop. The number, which you can see in our mobile apps and on vine.co, updates in real time, so as you watch a video, you'll know you're watching with others at the same time," wrote Mike Kaplinskiy, API Lead, Vine.

The blog announcement also notes that some of the Vines will show a '+' symbol next to the loop count. It means that the actual loop count is likely higher as the company started tracking loop counts from April 3, which are the figures that are being displayed as of now - thus most Vines before this date will feature the symbol.

Additionally, the Vine app along with the loop counts feature in Android and iOS apps, also has a new design of Activity feed, more visual and concise notifications, plus new notifications when a friend joins Vine. Also in between the new and older activity, users will see a notification if their Vines surpass milestones of 25 likes or 100 likes. The company has also re-designed the feed and the app now offers "edge-to-edge videos."
Comments