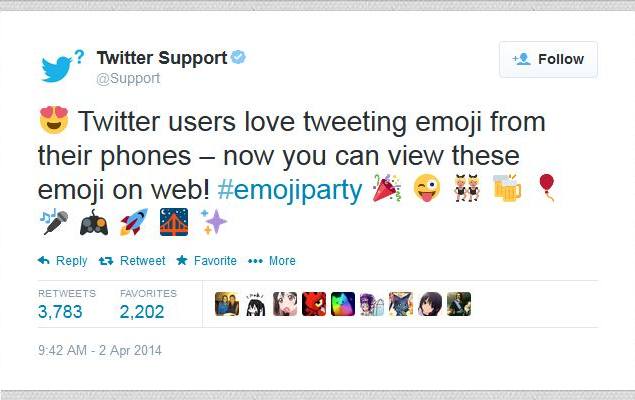 Until Wednesday, emoji lovers on Twitter could only use these colourful characters while browsing on mobile apps. With the increasing popularity of the emoticons, Twitter has updated its Web interface to display emoji for the desktop version as well.

Previously, the tweeted emoji images from the mobile apps (Android and iOS) use to appear as hollow boxes on the web. Now with the update roll-out (already available in India), users can see them in the Web interface. However, compatibility with embedded tweets is still lacking, but that is speculated to be fixed later. Also the Tweetdeck support for emojis seems to be inconsistent, as some users can see them and some can't.

The Twitter team has been doing a lot of changes for a while now. Just a day before, Twitter made it easier for its users to search for tweets, with new date-based search options.

The feature is accessible via Twitter's 'Advanced Search' option. Utilising Advanced Search, Twitter users can now enter a date range, apart from the previously present filters for people and places.

Earlier there were reports indicating Twitter to release a mobile-advertising product soon that will allow app-makers to encourage downloads of their software. The firm is said to expect app-install advertisements to attract advertisers in the e-commerce and gaming industries.

Also users can soon expect a new profile redesign to its iOS app. Reports suggested that Twitter updated its iOS app for some users (selected for testing of the app), and added some new features to these users' profiles.
Comments