Twitter Rolls Out Limited Reply Feature to Everyone, Lets Users Decide Who Can Respond to Their Tweets

Twitter’s limited reply feature, after being tested for months, is now available for all users. 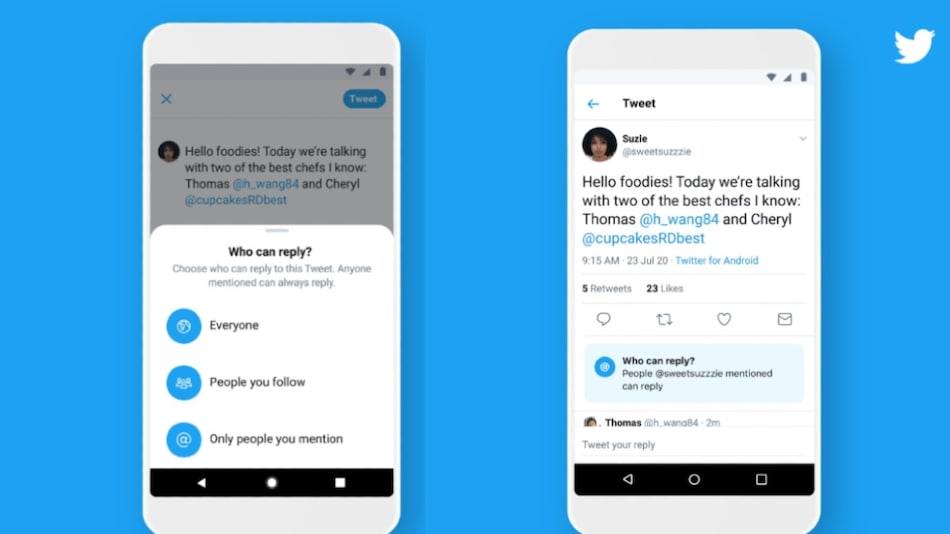 Twitter has rolled out its limited reply feature for all users across the globe today, after nearly three months of testing. Before sending a tweet, users will now be able to choose who can reply to it. This includes people they follow, only the people mentioned in the tweet, or everyone - with the last being the default setting. Twitter says that feature ensures that unwanted replies don't get in the way of meaningful conversations. The feature is now available for all Android and iOS users, as well as for the Web version.

Twitter rolled out this feature for testing to some users in May. Twitter's director of product management, Suzanne Xie, wrote in a blog post that the new settings helped users feel safer, have more meaningful conversations, and yet see different point of views.

Now, you can choose between the three aforementioned options via the small globe icon at the bottom of your tweet. If you don't click on anything, the default option will be assumed, and everyone will be able to reply to it. Tweets where you choose the limited reply options will be labelled as such, and the reply icon will be greyed out for people who can't reply. However, everyone will still be able to view, like, and retweet these tweets.

Xie elaborated on the feedback received from users in the blog post, saying that people felt more protected from spam and abuse. Among other positive feedback, Xie said that problematic repliers weren't finding other ways to comment, and that no uptick in unwanted Direct Messages was noted. Sixty percent of people who used this feature during the test didn't use Mute or Block.

“Sometimes people are more comfortable talking about what's happening when they can choose who can reply. We've seen people use these settings to have conversations that weren't really possible before,” Xie said.

This feature is especially useful for people who use Twitter to have conversations about social unrest, and face backlash for it, often in the form of hateful and abusive replies. Some people in the beta mode used this feature to have more sensitive conversations about politics and social issues. Tweets that used this setting about topics like Black Lives Matter and COVID-19 are on an average longer than those that don't use the setting, Xie said.

Xie maintained that Twitter believes it is important for people to be able to see different perspectives. The post also mentions that people more frequently look for additional commentary when replies are limited. Different views can still be shared via Retweets with Comments, that sometimes reached a larger audience than the original tweet, as analysed in the post.