The new Twitter messaging feature is available in India. 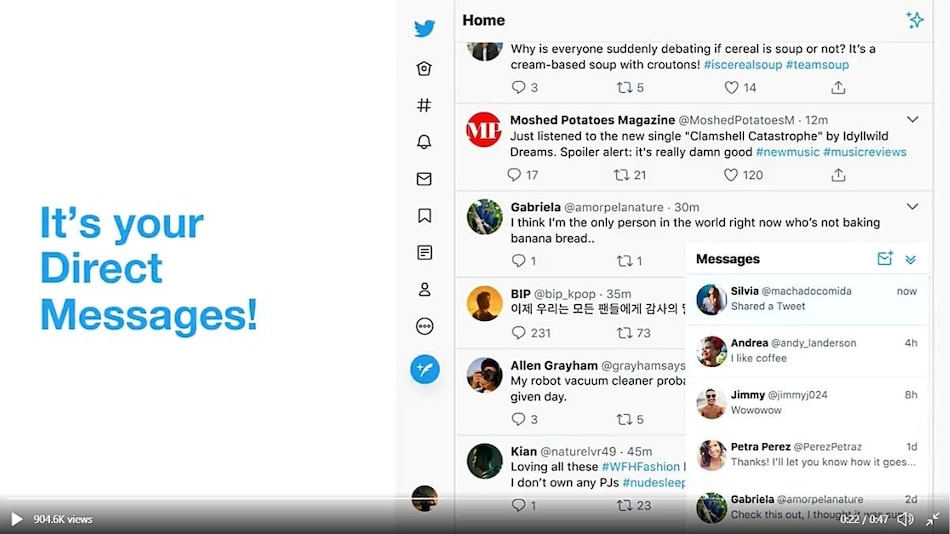 Twitter is rolling out a new feature that will enable users to easily slide into DMs (Direct messages). The new messaging interface essentially allows users to read or reply to messages without having to leave the home page. Earlier, to access the direct messages on Twitter, users had to switch to the DMs section by clicking on the mail icon. The new interface shows DMs in a pop-up window directly on the home screen. Twitter is currently rolling out the new messaging interface on its Web client, and it is being pushed out in a phased manner. Gadgets 360 was able to verify its availability in India.

The message prompt will appear at the bottom right corner of the screen. The new Twitter DM interface is similar to the message prompt on LinkedIn. With the introduction of this feature, users will be able to access direct messages right on the home page. However, the previous DM section on Twitter Web is still available to use despite the introduction of the new interface.

The new DM feature is also highlighted in a teaser posted on Twitter. More details about its availability on the Twitter app for Android and iOS are expected from the company in the coming days.

To improve user experience, the microblogging platform has been continuously adding new features amidst the global pandemic. Earlier in June, Twitter had introduced a Snapchat-Story like feature dubbed Fleets. With this feature, Twitter allowed users to post any content that lasts for only 24 hours. The company in the same month had introduced voice tweets that allowed users to send 140-second audio clip attached to a tweet. Twitter has improved its List section on the platform as well.

However, the company is currently embroiled in a controversy after Twitter accounts of several prominent personalities were hacked. These Twitter accounts sent out tweets trying to dupe people into donating money in Bitcoin cryptocurrency.