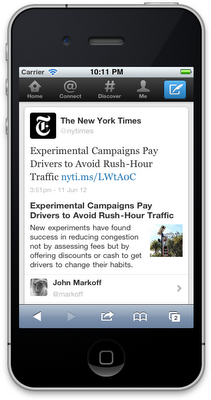 A Gulf wide Twitter alert enabled police to locate a month old baby girl stolen by a robber along with the car in which she was napping outside a shop in the UAE.

The baby, Laila was sleeping in a white Toyota Prado car when it was stolen, not far from the commercial hub of Dubai late on Saturday, after her parents left the car engine running as they nipped into a shop.

Within seconds the car and the baby had gone. Police put out a Twitter alert for the missing baby and within minutes they were flooded with more than 1,700 retweets from concerned netizens ranging from ministers to ordinary residents.

But it still took authorities more than seven hours to relocate the girl, when a resident of Sharjah tweeted that he had spotted the stolen car.

The car was found a few kilometres away from where it had been stolen.

"The baby was found safe and immediately rushed to Al-Qassami hospital where she was declared in good health and later restored to her frantic parents," the National newspaper reported quoting Sharjah police spokesperson.

The spokesman gave all credit to Twitter for the dramatic rescue.

TDSAT admits Idea petitions against Rs. 300 crore penalty by DoT
What you can buy for the price of 1 Apple share