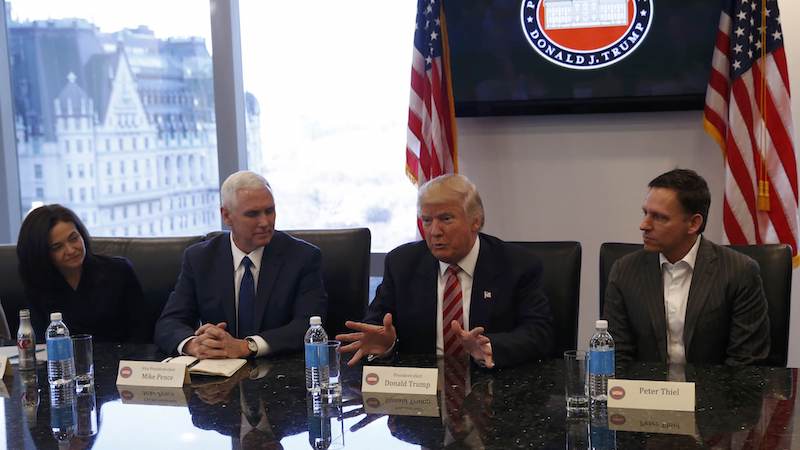 President-elect Donald Trump left Twitter off the invitation list for a meeting of technology company executives on Wednesday because it is too small, a spokesman for his transition team told Reuters.

The omission of Twitter from the meeting surprised some in the industry given Trump's prolific use of the social media platform during his election campaign and the company's high profile in discussions over policy issues such as cyber security and the spread of violent online propaganda.

"They weren't invited because they aren't big enough," the transition official said.

With a market capitalization of $13.85 billion (roughly Rs. 93,821 crores), Twitter is smaller than Facebook and Amazon, companies that were included in the meeting in New York.

The smallest company in attendance was electric car maker Tesla, with a market capitalization of $31.92 billion.

During the Obama administration, Twitter was a regular participant in meetings meant to address technology concerns, especially given its use by groups such as Islamic State and the ease with which the site is used for online bullying.

One source familiar with Trump's relationship with Twitter said the decision to exclude Twitter Chief Executive Officer Jack Dorsey was motivated by the president-elect's ire at the company, which rejected an advertising deal with his campaign in October.

Trump's election campaign had offered to pay to have an emoji, or small picture, that would show up on tweets during the second presidential debate anytime Twitter users tweeted the phrase "#Crooked Hillary," Republican Trump's nickname for his Democratic opponent Hillary Clinton.

Twitter rejected the deal, saying it might mislead users who would not be able to tell that the campaign had paid for the emoji.

The Trump transition spokesman said the emoji had nothing to do with the invitation omission. The official said Trump has had public spats with other tech leaders who were invited, including Amazon CEO Jeff Bezos, who also owns The Washington Post, and Apple CEO Tim Cook, who hosted a fundraiser for Clinton.

Trump, speaking to the group of technology officials at the meeting, acknowledged others had been left off the list, but he did not mention Twitter specifically.

"I won't tell you the hundreds of calls we've had asking to come to this meeting," he said to laughter in the room, "and I will say Peter (Thiel) was sort of saying 'no that company's too small,' and these are monster companies."