TikTok’s average rating is down to 3.5 stars on iOS from 4.5 earlier. 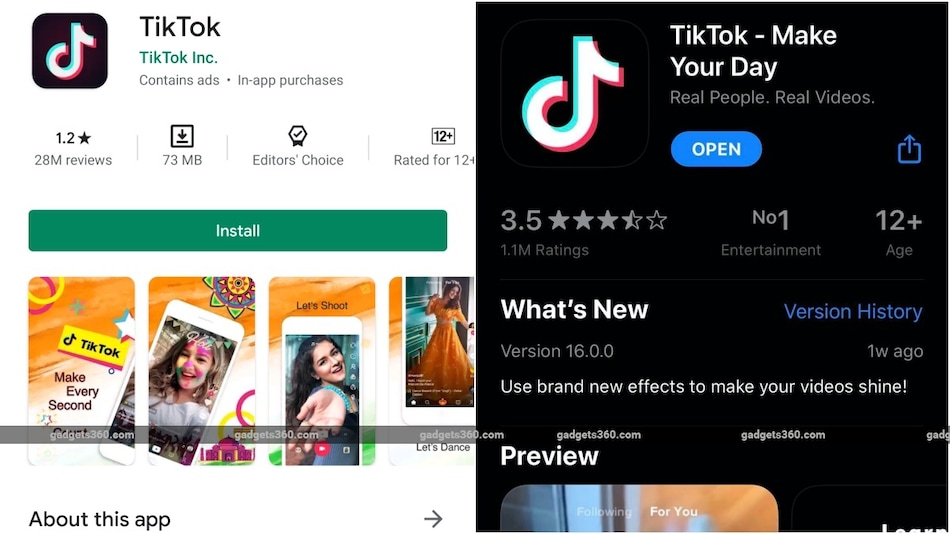 TikTok rating is down to 1.2 stars on Google Play Store after getting hammered by the supporters of YouTuber CarryMinati and the controversy surrounding a video from the platform's popular creator Faizal Siddiqui. Both CarryMinati fans and people miffed with the Siddiqui TikTok video accused of glorifying acid attacks on women are leaving 1-star reviews for TikTok on Android as well as on the Apple App Store. Other 1-star comments also called out TikTok as a Chinese app, and blamed China for COVID-19. The average TikTok rating on Apple App Store is down to 3.5 stars from 4.5 stars earlier.

TikTok's rating on the app stores is likely to slide even further over the coming days as hashtags like #IndiansAgainstTikTok are currently trending. Apple App Store that initially seemed unaffected by 1-star reviews as there are significantly lower number of iPhone users in the country than Android, is finally showing some impact. After days of 1-star ratings, the average rating on iOS went down to 3.5 stars.

Same as the Apple App Store, TikTok's Google Play Store listing is flooded with 1-star reviews. As mentioned, this drop in TikTok rating can be attributed to followers of YouTuber CarryMinati, after the creator released a video titled YouTube vs TikTok - The End, part of an ongoing feud between TikTok creators and YouTubers. In this video, the CarryMinati roasted TikTok creators, especially Amir Siddiqui. CarryMinati's video went viral, hogging over 75 million views before being taken down for violating YouTube's terms of service. The video also helped the YouTuber gain around 8 million new subscribers. More than new subscribers for CarryMinati, this video led hundreds if not thousands of the YouTuber's followers to TikTok's app listings to leave 1-star reviews to show their dislike for the platform and help prove that somehow YouTube was better than TikTok. These followers also shared YouTube vs TikTok memes and other content on social media, rallying even more people to do the same.

While YouTube vs TikTok fever was still in its prime, a video from TikTok creator Faizal Siddiqui surfaced on social media and it was accused of glorifying acid attacks on women. The video garnered criticism from all over, including celebrities, politicians, and National Commission for Women, forcing Tiktok to suspend the creator's account and remove the copies of the video from its platform. Siddiqui himself had removed the video after the uproar and apologised for it. This video has further driven people to find way to show their dislike of the short-video app and they are doing the same by voicing their opinions on social media and by rating the app 1-star on Google Play Store and Apple App Store.

The not-so-great image of China among part of Indian population because of various reasons is another driver behind these 1-star reviews. TikTok parent Bytedance is headquartered in Beijing.