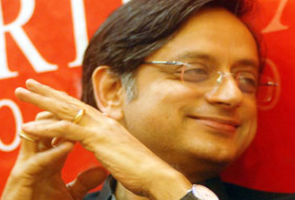 Highlights
Former minister of state for external affairs Shashi Tharoor, one of the early Indian politicians to get hooked to Twitter, feels that political leaders have realised that social media was the right platform to reach out to a large number of people.

Participating in an interactive session titled "Impact of Social Media on Political Advertising" here, the tech savvy congress MP said: "The social media is quite important in politics. Because of its huge following, one is able to reach out to a large number of people."

"Leaders have been now turning to the tech world to convey their messages to the public at large within no time. When my tweets started getting noticed leaders in large numbers would come to me asking about what it (Twitter) was how it is done."

"Gradually more and people have joined the bandwagon. You can find people like Manish Tiwari (Congress spokesperson), Anil Shastri (Congress leader), leader of the opposition in Lok Sabha (Sushma Swaraj), and Gujrat Chief minister Narendra Modi on Twitter. People have realised the importance of the social media."

Trinamool Congress leader Derek O'Brien, who hosted the longest running quiz show on Indian television - The Bournvita Quiz Contest - said: "When I started off on Twitter it was 90 percent quizzing and 10 percent politics. But now it's just the reverse with most of my tweets related to politics."

The audience loved the banter between the two with O'Brien taking a dig at Tharoor saying: "I learnt from Shashi (Tharoor) how to tweet and not get into deep water," referring to Tharoor's tweets which often created controversies.

Tharoor, sharing his experience on the tweeting controversies, said: "The mainstream media often twisted my tweets which led to people giving me unsolicited advice. One of such quotable advice was from the leader of opposition, who said 'too much of tweeting can lead to quitting'."

On the negative aspect of the social media, the leaders said it was accessible mostly to the urban areas. The language is also a kind of barrier as most of these sites are in English.

Dwelling on the importance of the mobile telephony, Tharoor said: "With almost half of the population of the country using mobile, it is a very potent medium to reach out to the people. In fact, while campaigning, I had recorded a voice message appealing for votes and had it delivered to the users in my constituency. It worked wonders. Even to this day people think they actually talked to me."

When Tharoor asked when would Trinamool Congress chief Mamata Banerjee join Twitter, O'Brien replied: "She is extremely tech-aware. Who knows she might be reading mine and your tweets."
Comments