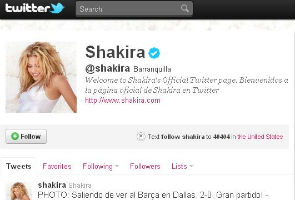 The artist exceeds in numbers of Twitter fans other celebrities and performers such as Ashton Kutcher, Taylor Swift and Oprah Winfrey, according to statistics compiled by the social network.

In addition, Shakira leads the Twitter list of most-followed Spanish-speaking celebrities, it was noted in the same communique.

The Colombian singer has more than 38 million fans on Facebook and her videos and tunes have had more than 1 billion views on YouTube.
Comments