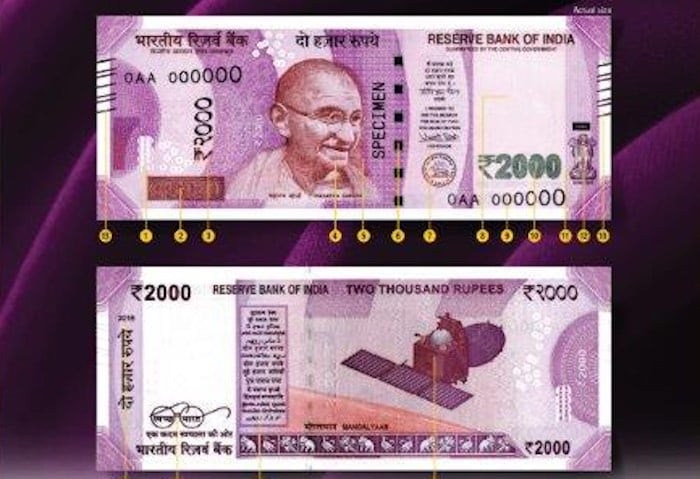 In what should come as a surprise to no one, Finance Minister Arun Jaitley on Wednesday confirmed that RBI's new Rs. 2000 note has no GPS tracking chip.

"From where did you come to know this? I haven't heard of it," Jaitley replied when asked by a reporter if the new Rs. 2,000 note issued by the Reserve Bank of India (RBI) has a chip to enable its tracking via satellites.

That's official confirmation for something we already told you on Wednesday, dispelling rumours floating on WhatsApp and other social media that RBI's new Rs. 2000 notes have a 'near-field GPS' or NGC chip that will be used to track these notes.

We explained how the technology that these new Rs. 2000 notes being issued by RBI are 'claimed' to have would be technically not feasible. This is what a popular WhatsApp forward being circulated claimed about the new Rs. 2000 currency:

India is all set to add one more denomination to its currencies shortly. The Reserve Bank of India (RBI) will be issuing Rs 2,000 currency notes, the highest to come into circulation, even as some experts feel7 high-value denominations should be discontinued to curb black money.

The Rs 2000 currency is designed keeping in mind to eradicate the black money issues using state of the art indigenous nano technology, every Rs. 2000 currency note is embedded with a NGC (Nano GPS Chip)

How the embedded NGC Technology Works? The unique feature of the NGC is it doesn't need any power source. It only acts as a signal reflector. When a Satellite sends a signal requesting location the NGC reflects back the signal from the location, giving precise location coordinates, and the serial number of the currency back to the satellite, this way every NGC embedded currency can be easily tracked & located even if it is kept 120 meters below ground level. The NGC cant be tampered with or removed without damaging the currency note

How will this help eradicate black money menace? Since every NGC embedded currency can be tracked. The satellite can identify the exact amount of money stored at a certain location. If a relatively high concentration of currency is found a certain location for a longer period of time at suspicious locations other than banks & other financial institutions. The information will be passed on to the Income Tax Department for further investigation

Just a beginning of the end of black money in India

To remind our readers that nearly everything in the WhatsApp message quoted above is false, and there's no GPS tracking chip of any kind in the new Rs. 2000 note.