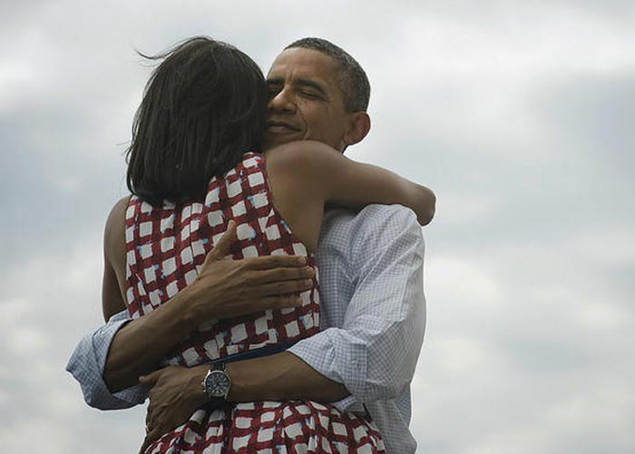 It was a moving photo like countless others on Facebook, but the caption "four more years" said it all -- US President Barack Obama had won re-election, and was about to make social media history.

After a months-long, gruelling presidential campaign fought both off- and online, Obama sealed his tech-savvy reputation late Tuesday by announcing his victory over Republican foe Mitt Romney on Twitter and Facebook with the photo.

By early Wednesday, the shot of a smiling Obama holding his wife Michelle in a loving embrace had already broken records on both social networks -- bringing to a climax a hard-fought online campaign for supporters and votes.

"This Barack Obama photo is the most-liked Facebook photo of all time," the social network announced Wednesday, as it clocked up more than 3.5 million "likes".

The picture was actually taken in August in Iowa, at a time when a weary president seemed to lack the necessary spark to win re-election.

Wearing a simple red-and-white checked dress with a blue belt, the First Lady had joined her husband at the end of an exhausting three-day bus tour of the Midwest, giving his battered political brand a timely jolt of energy.

Not only had she appeared to reinvigorate the president, but her dress also drew countless comments, reportedly purchased for just under $90 on online fashion store ASOS.com.

On Twitter, the photo of the 44th US president hugging his wife had been retweeted 714,800 times mid-Wednesday, far outpacing singer Justin Bieber whose tribute to a fan who died of cancer held the previous record in popularity.

The president's emotional announcements on Twitter and Facebook mark the culmination of a sophisticated, months-long social media campaign that has seen Obama's team work the popular platforms hard to garner supporters and votes.

Social networks emerged as key tools in the US presidential campaign, with both Obama and his Republican foe Mitt Romney staging major pushes on the platforms.

But while Romney has increased his presence hugely on social media compared to 2008 Republican presidential candidate John McCain, Obama is seen as having retained the upper hand from his successful online campaign four years ago.

"The picture said it all -- it made everyone feel closer to the campaign in a way that hasn't been done before," he said.

They also carried out innovative initiatives, such as Twitter town halls with the president or his top advisors that allowed anyone on the social network to ask them questions.

Obama also checked in on social news site Reddit in August to have a live chat with the public on issues as varied as hurricane relief efforts, the space program and Internet freedom.

And just hours before polls began to close in states around the country Tuesday, he took to Reddit again to appeal for votes, and kept tweeting through the evening to remind people to cast their ballots.

"It's really about a connected relationship with him, it doesn't feel like he's just someone out there, there is connectedness," said Green, pointing out that the Obama camp tweeted far more often than Romney's team.

"It shows that the model of very active engagement, having a loud voice seems to be effective," he added.

"But it's hard to prove that he wouldn't have won without this."