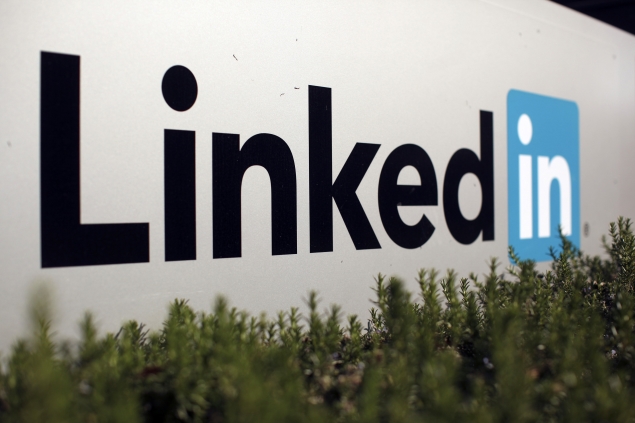 LinkedIn Corp issued a conservative revenue forecast through the end of the year that damped a sizzling run in its stock price, taking the shine off an upbeat performance at the professional social network in the third quarter.

The company said it expected between $415 million and $420 million in revenue for the final three months of the year, lower than the $438 million expected by analysts polled by Thomson Reuters I/B/E/S. LinkedIn said fourth-quarter growth will not be as impressive as a year ago when it rolled out new features.

Reflecting better-than-expected numbers for July-September, it did nudge its full-year estimates upward to $1.5 billion. But that also fell slightly short of Wall Street's sky-high expectations.

Shares in the company that's become an online reference point for job searches and career development slid 4.5 percent to $236 in choppy after-hours trading. Even at that price, the stock has more than doubled in the past year and quintupled since 2011, when it went public at $45 a share.

LinkedIn's dizzying valuation - with a market value of $27.7 billion it is trading at roughly 158 times forward earnings, compared with Facebook Inc's 70 times and Google Inc's 23 - has heightened scrutiny on whether the company can maintain its growth streak.

So far, Chief Executive Jeff Weiner has beaten top-line targets every quarter since his company went public. But LinkedIn, a company born in the quickly fading era of desktop Internet sites, has had to move swiftly to pursue a variety of other revenue streams.

On a conference call Tuesday, Weiner said finding ways to make money out of the company's mobile applications is a matter of "strategic importance," describing the company as being in a "transition period" as it introduced new mobile advertising units.

But Kerry Rice, an analyst at Needham & Co, noted that LinkedIn has guided conservatively for several consecutive quarters only to exceed targets. "People get a little too exuberant," Rice said. "This was resetting those expectations."

LinkedIn's fundamental business roared along in the third quarter.

Monthly users rose to 259 million during the quarter, a 38 percent rise from a year ago, LinkedIn said. In the quarter, the company earned 39 cents a share, excluding certain items, exceeding the 32 cents expected by analysts.

Mobile transition
By making itself a popular tool for professional recruiters and job seekers who are willing to pay for its services, the company has enjoyed a steady stream of income and avoided the turbulence encountered by free, consumer-facing social networks like Facebook.

Like many other Internet companies, LinkedIn emphasized its shift to mobile. Mobile users now account for 38 percent of total users versus 8 percent in early 2011, CEO Weiner said.

The in-stream ad unit, which resembles ones used by Facebook and Twitter Inc has generated the majority of clicks from users on mobile devices rather than LinkedIn's desktop website, Weiner told analysts.

But he warned that the ads will not generate enough revenue to make a material impact until next year.

The company's aggressive push into mobile has not been without bumps. Security experts this week criticized a new LinkedIn feature called "Intro," which re-routes a user's emails through LinkedIn's servers, as a potential security risk.

The company was pressed to issue a blog post last week to clarify some of its security practices while also characterizing some of the criticisms leveled against Intro as "speculative."

Asked about the issue by an analyst on Tuesday, Weiner did not address the matter in depth except to say, "We recognize the current climate and the sensitivity around this, and work hard to make sure it's as secure as possible."