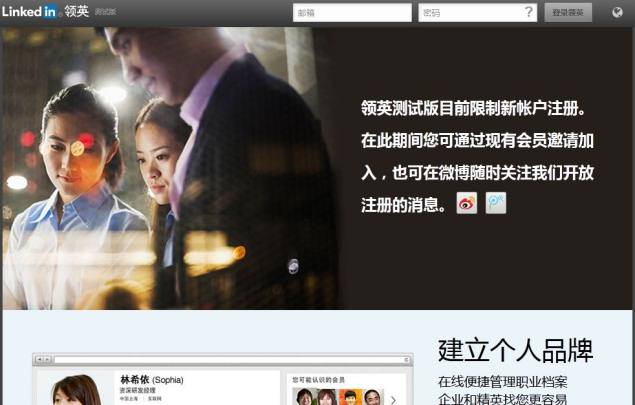 Professional social networking website LinkedIn Corp launched a Chinese language version of its website on Monday, a move that could jumpstart its expansion into the world's largest Internet market by users even as the company acknowledged it will have to police what some of them say on its website.

LinkedIn Chief Executive Jeff Weiner acknowledged in a blog post on Monday that the company would have to censor some of the content that users post on its website in order to comply with Chinese rules.

But Weiner said the benefits of providing its online service to people in China outweighed those concerns. He vowed that the company would be "transparent" about its practices as it builds its presence in a country it said is home to one in five of the "knowledge workers" that are LinkedIn's core audience.

Shares of LinkedIn were roughly flat in after-hours trading on Monday at $199.49. The stock is down roughly 23 percent from its 52 week-high of $257.56 as investors fret about two consecutive quarters of declines in its page views.

"Extending our service in China raises difficult questions, but it is clear to us that the decision to proceed is the right one," Weiner said.

LinkedIn's arguments about trade-offs for the greater good are reminiscent of Google's justification for its controversial 2006 decision to launch a self-censored version of its search service in China.

Four years later, Google reversed course and relocated its search engine to Hong Kong from mainland China, following a dispute with the Chinese government over what Google said was increasingly onerous censorship and cyber-attacks it said originated in China.

The Chinese language website that will be available on Monday is a "beta," or test, version of the site. LinkedIn is still in the process of getting a license to operate the Chinese language site, which will require that the company maintain server computers in China that will store data about its Chinese users, according to a source familiar with the matter.

LinkedIn already has more than 4 million users in China who use its English language website, but the company has signaled that it is interested in making a broader expansion in the country.

Weiner said the Chinese language site would help LinkedIn reach 140 million professionals in China, providing the potential for the company to significantly expand its current audience of 277 million members.

The company's expansion into China comes as LinkedIn is trying to transform itself from a social network used primarily by job seekers and by recruiters into a more full-fledged online hub for professional workers.

LinkedIn has recently begun encouraging its members to write career-related articles and post them on the website, a move the company hopes will boost the amount of time users spend on its site.

Weiner said that China's restrictions on content would be implemented "only when and to the extent required."

"At the same time, we also believe that LinkedIn's absence in China would deny Chinese professionals a means to connect with others on our global platform, thereby limiting the ability of individual Chinese citizens to pursue and realize the economic opportunities, dreams and rights most important to them," he said.