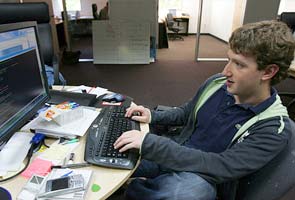 Highlights
Since the moment he dropped out of Harvard University, Mark Zuckerberg has stayed remarkably focused on two things: Facebook, and being the boss of Facebook.

Early on he was persuaded of the vast potential of the social network he built in his dorm room, say friends, investors and detractors. He pushed his team to be fast and take risks. He resisted efforts to change the way Facebook looked and worked, even if, in the beginning, it meant giving up revenue.

Most important, he arranged the ownership of Facebook so as to give himself extraordinary power to steer the company. By the time Facebook filed for a $5 billion public offering on Wednesday, Mr. Zuckerberg had managed to hold on to more than one-fourth of the shares in the company, and his agreements with other investors enhanced his voting power to almost 60 percent of total shares.

That's a greater measure of control than Bill Gates had at Microsoft when it went public in 1986 (49 percent), and far greater than what the co-founders of Google had in 2004 (16 percent each). Typically, say Silicon Valley veterans, a first-time entrepreneur gets to the public market with a far smaller stake in his or her creation. Mr. Zuckerberg's arrangement leaves little room for investors to have much input on the company's direction.

Mr. Zuckerberg's success is an object lesson in what works in crowded, competitive Silicon Valley: Remain in charge, stave off potential predators and expand the company so quickly that no one can challenge the boss.

"He always knew before the rest of us what Facebook could be," said Paul Madera, managing director at Meritech Capital Partners, who invested in the company in 2005. "Mark's vision on the purity of the product really did benefit from his control and ownership. It wasn't subject to committee decisions. It was all Mark."

The power that Mr. Zuckerberg wields over the company has already drawn scrutiny. "You're willing to take someone's money but not willing to invite their participation," said Charles M. Elson, a professor of corporate governance at the University of Delaware. "It makes meaningless the notion of investor democracy."

Professor Elsen added that Mr. Zuckerberg's arrangement is similar to moves by founders of other technology companies, including Google, to create special classes of stock that grant them extra voting power. (The New York Times Company and other media companies have similar structures.)

Facebook declined to make executives available for interviews ahead of the offering.

The focus on staying in charge began early. Sean Parker, one of Mr. Zuckerberg's first and most important advisers, helped him with that. Mr. Parker had learned a hard lesson himself about losing control: He was ousted by the backers of a company he founded, an online address book called Plaxo. Mr. Parker helped ensure that would never happen to Mr. Zuckerberg.

"The only way I will resign," Mr. Parker recalled telling the rest of the board, "is if Zuck receives control of the board seat, because he's the only one I trust to steer the company."

Before Facebook came about, sites like Friendster and MySpace had already defined social networks. But Mr. Zuckerberg was convinced early on that Facebook could be something greater, and his convictions impressed both peers and elders.

Mr. Madera, the venture capitalist, met him in 2005. At the time Facebook was open only to college students, and the only advertising it took in was from things like students selling bikes at the end of the semester. But Mr. Zuckerberg described what he thought it would become. "It was going to be the first place people went to when they got up in the morning and the last thing they went to before they went to bed," Mr. Madera recalled him saying. "I thought he was unrealistic. If I've learned one thing in the investing business, it's that when people talk about unrealistic things, you don't tell them they're crazy." Mr. Madera invested anyway, putting in a total of $25 million.

Mr. Zuckerberg's early backers included many technically skilled company founders, including Peter Thiel, a co-founder of PayPal; Reid Hoffman, who helped build PayPal and founded LinkedIn; and Marc Andreessen, who founded Netscape. Through them and others, Mr. Zuckerberg sought out the most successful technology bosses: Mr. Gates, Steve Jobs, and Larry Page and Sergey Brin, co-founders of Google.

"There is no problem he doesn't think he can solve, but he constantly tries to find the smartest people he can to give him advice," said one of his early advisers and a Facebook investor, who asked not to be identified in the run-up to the offering. "Nearly universally, he asks them, 'Who are the smartest people for me to talk to about this?' "

In 2008, Mr. Zuckerberg brought in Sheryl Sandberg, a veteran executive from Google with expertise in online advertising, to be chief operating officer. She has become a prominent public face for Facebook, but it is always clear who is in charge.

Mr. Zuckerberg has always kept a direct hand in controlling the way the Facebook site works, his associates and advisers say, refusing early on to clutter the news feed with advertising. He tweaked the site constantly, sometimes even earning the ire of users, as when it suddenly made some information that people had made visible only to friends available for all to see. That misstep ultimately prompted the Federal Trade Commission to cite Facebook for engaging in deceptive business practices. Mr. Zuckerberg issued a personal apology, admitting to mistakes.

"Better done than perfect" was how Mr. Zuckerberg described his philosophy on products in Facebook's filing with the Securities and Exchange Commission.

One former Facebook engineer described Mr. Zuckerberg as having taken on a role similar to the one Mr. Jobs held at Apple. Everyone understood that Facebook was his creation, and that he would have the final say over what it would become.

A few years ago, for example, a small team at the company worked long and hard on building a social calendar feature, the engineer recalled. They talked about it for weeks, until the day when they suddenly stopped. The engineer asked what had happened to the project. "Zuck said no," they told him. "Killed it. Not modified it. Killed it."

Just as remarkable, he recalled, no one seemed especially upset. "We all sort of viewed Facebook as a manifestation of Zuck's taste, his idea, his vision," the engineer said. "When he made a decision, that was the decision." The engineer did not want to be identified ahead of the public offering.

To Mr. Zuckerberg's advantage, Facebook grew fast and became so valuable that its chief executive's influence could not be challenged.

"Mark has retained nearly absolute control over his board of directors," said Joe Green, a former roommate at Harvard who now runs Causes, which has a popular Facebook application. "Facebook would have been sold a zillion times over if not for Mark. Especially as you hire older people with direct financial needs, you get a lot of pressure to get liquidity. But you need Zen-like self-confidence to turn down a billion-dollar acquisition offer."

By all accounts, one of the most critical decisions Mr. Zuckerberg made was to defer a public offering for as long as possible. He did not want to get bogged down with regulatory requirements and, improbably enough given his site's bread and butter, sharing the details of his company's workings.

David Sacks, who was at PayPal when it went public, remembers what happened there: employees obsessed over the value of their stock and executives worried about making quarterly earnings targets. "You would rather be a pre-I.P.O. company than post-I.P.O.," Mr. Sacks said.

After Mr. Zuckerberg's I.P.O., it seems highly unlikely that he will take his billions and leave Facebook. The company's filing gives Mr. Zuckerberg the authority to designate his successor "in the event that Mr. Zuckerberg controls our company at the time of his death."

On Wednesday night, hours after the filing, a photo was posted on his Facebook page. It showed his desk, with an open Mac laptop, a yellow Gatorade bottle and a sign that read: "Stay focused and keep shipping."
Comments