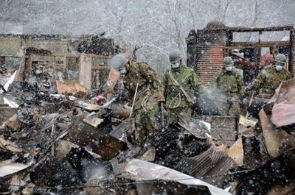 "We sincerely apologise for causing serious worries and trouble over the accident at Fukushima No.1 Nuclear Power Plant, radiation leak, planned blackouts," TEPCO said in its profile in Japanese on the micro-blogging site.

TEPCO said it planned to provide information about radiation leaks and blackouts through its Twitter blog, which has already attracted 117,838 followers in the first six hours with only two messages.

Its first tweet was about the threat of major power blackouts in the capital unless electricity use was reduced in the aftermath of the massive earthquake and tsunami.
Prime Minister Naoto Kan said Sunday he had authorised managed outages to prevent any sudden major supply disruption, as electricity supply has fallen sharply since the quake-tsunami disaster hit power plants on Friday.

The Tokyo-based power company follows accounts of local news media, regional authorities, Twitter users offering messages on earthquake alerts and support for quake victims.
TEPCO has been under fire over delays in disclosing information related to the plant, where helicopters dumped tonnes of water in a desperate bid to cool reactors crippled by the earthquake to prevent a catastrophic meltdown.