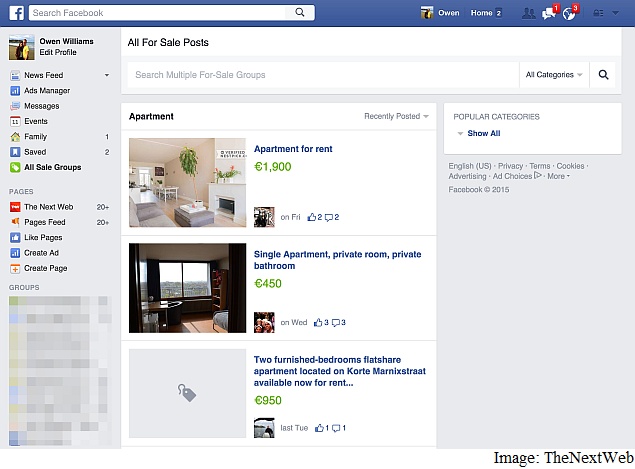 Following the testing of its classifieds feature back in December, Facebook is now said to be testing a feature that takes it a step further. Users are seeing the ability to search items for on sale across both public and subscribed groups, divided into categories.

The new Facebook feature in testing will reportedly rollout globally in the coming weeks, as per The Next Web. Users can access the feature by clicking on 'All Sales Groups' on the left pane, which will then bring up a search bar that allows users to search 'Multiple For-Sale Groups', and also filter the search by product categories, which range from antiques to video games and everything else.

Previously, Facebook had confirmed it was testing a feature that allowed users to post items for sale in groups. Some users in December were seeing a 'Sell Something' button next to 'Write Post'. Users had to key I information such as the description, photos, price, and delivery options.

Facebook had then said, "We are testing a new feature within Facebook Groups to help people better organise posts about items they'd like to sell to other people on Facebook. This is a small test limited to select Facebook Groups that have active selling communities today."

With the expanded feature, Facebook certainly looks set to give both traditional classified sites (such OLX) a run for their money, as well as eBay, which sells a significant number of second-hand goods. While Facebook reportedly asks for no hosting fees, and can help put a face to the person selling the product, it has no buyer and seller protection like eBay.

At the time of the previous test, Facebook's help page said for the Sell Something feature had specified that in case of any problem, the buyer should contact the seller and that it is not responsible for any transactions made through the social networking website. Facebook has yet to comment on the new feature.
Comments