In webcast and tweets, MTV tries a new awards show 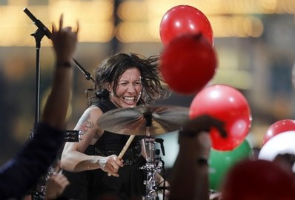 A newfangled, multiplatform event, the O Music Awards aired Thursday night on not any of the MTV Networks but on Facebook, MTV websites and mobile apps. The live, hour-long webcast was billed as a fan-friendly celebration of digital music -- an attempt by the ever-youthful network to officially fete the new arenas of music culture.

Embracing the amorphousness of the digital world, MTV kept things so unstructured that even the "O" in the show's title was intentionally left undefined and open for interpretation.

The webcast emanated from an outdoor stage in Las Vegas, but effectively took place in the digital realm. Most all winners accepted awards (trophies were a kind of glass cube) remotely in taped video acceptance speeches. Some performances, like those by Foster the People and Mumford & Sons, were piped in from other locations.

The exuberant duo Matt & Kim served as both house band and quasi hosts.

"Tonight, we're celebrating every gigabyte of musical interactively known to man," said drummer Kim Schifino, before admitting she had no idea what a gigabyte even is.

Some familiar faces won awards, such as Lady Gaga, who won most innovative artist and must-follow artist on Twitter. The winners were chosen by fan voting, which was tallied in real time ahead of the awards.

"You make me feel so brave," said Gaga in a video. "And you make me feel like I can really push the boundaries of commercial, mainstream music and art."

"That's so amazing, you guys," said Black to squealing fans around her.

Andy Samberg's comedy group Lonely Island won funniest music short for their "Saturday Night Live" music video "I Just Had Sex." Kanye West won for best tweet, an inevitability since he was the only one nominated. Website Pandora won for best music discovery site. Singer-songwriter Andy Grammer won most innovative music video for his "Keep Your Head Up" video.

Talking heads were occasionally made glitchy, as if they were teleported from the future. Viewers were given a few options in their perspective, including watching the main show, the audience or rapper Chidera "Chiddy" Anamege, who provided the night's sideshow. He rapped for more than nine hours and 18 minutes to break the Guinness World Record for longest freestyle rap.

Chiddy's endurance was admirable, but he wasn't exactly good TV but a man mumbling on the couch. He rapped: "This is easy to me/ It's just entertainment."

MTV has had great success in its Video Music Awards and (to a lesser extent) its Movie Awards. Both began as upstarts keyed on upsetting staid award shows, but have become long-running institutions in their own right. Each show has always put a premium on spontaneity.

The OMAs, MTV made clear, are an experiment -- a "beta award show," said Dermot McCormack, head of digital media at MTV Music Group.

Still, the whole affair generally came off as low-rent, with mostly middle-tier acts performing, a lack of polished hosts and a generally canned feeling, despite all the attempts to equal the Web's democracy.

If the mission was to create social media buzz, the OMAs didn't appear to succeed on a large scale in real time. On Twitter -- one of the primary places the network hoped to stoke conversation -- the dominant topics remained the royal wedding and Steve Carell's "Office" farewell. The OMAs did land two trending topics on Twitter, both courtesy of Chiddy's performance.

MTV could still point to the 3 million votes cast online ahead of the Thursday event as evidence of enthusiasm. The network said Friday that 651,000 watched the live stream, MTV's second largest online audience behind its 2009 VMA webcast.
Comments