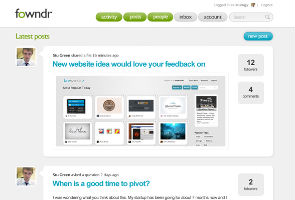 Highlights
Lookout people of the Internet, there's another social network on the horizon! But this new network isn't designed to compete with Facebook, Twitter or MySpace; instead, it's intended for the people who build these services.

Fowndr, pronounced founder, is a new private network that hopes to offer creators of technology start-ups a place to discuss new projects and share learning, resources and files with other like-minded technologists.

"It's basically a safe place for entrepreneurs and founders to share ideas, projects and files," said Stu Green, founder of Fowndr. "The service is designed for people who have been involved in setting up businesses in the past and love new enterprise."

Mr. Green, who is based in London, said he had the idea for his new company while working on a number of other technology start-ups when he yearned for a place to share ideas and receive feedback from seasoned entrepreneurs.

Since such a site didn't exist, he decided to build it.

When Fowndr opens in the coming weeks, it will offer a free, invite-only service, where registered members can invite others to the site. Mr. Green wants to ensure that it remains a place for technologists and entrepreneurs to help grow their Web sites, and help others solve problems that come with a start-up.

"The network is going to be based around trust, including who members decide to invite to the service and how they share their knowledge," he said.
Comments