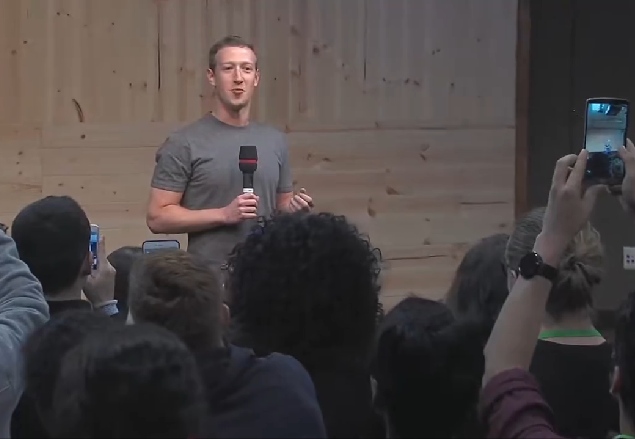 Facebook CEO Mark Zuckerberg is not in favour of the much-requested 'Dislike' button, but emphasised the firm was looking at providing more ways of expression emotions on posts.

In response to a query during his second Q&A session on Thursday at Menlo Park, Zuckerberg said that the Dislike button is not a good idea and Facebook isn't working on any such thing.

"Some people have asked for a dislike button before [..] they want to be able to say that a thing isn't good and that's not something that we think is good for the world. So we're not going to build that. I don't think there needs to be a voting mechanism on Facebook whether posts are good or bad. I don't think that's socially very valuable or good for the community," said Zuckerberg.

(Also see: >Facebook's Mark Zuckerberg on Why He Found 'The Social Network' Hurtful)

But one thing that he specifically pointed out was that Facebook thinking about alternative ways to express emotions, apart from the existing and only Like button. For example - the Like option for the death of loved one or an unfortunate incident seems inappropriate.

Post by Q&A with Mark.
"We've been thinking about it for quite a while [..] what's the right way to make it so people can easily express a broader range of emotions, to empathize. Or to express surprise or laughter or any of these things. You can always just comment. But there's something that's so simple about the like button [..] I think giving people the power to do that in more ways with more emotions would be powerful. But we need to figure out the right way to do it so it ends up being a force for good and not a force for bad and demeaning the posts that people are putting out there."

Facebook had announced the second Q&A session back at the end of last month, and asked users on the dedicated Q&A with Mark page to post questions. Apart from the reason for the continued absence of the Dislike button, several other questions were answered by Zuckerberg at the Q&A, where he also took questions from users at the event.

With the much-documented addiction to social media a trend in modern society, Zuckerberg tackled the tough question of whether Facebook was a waste of time. The 30-year-old CEO said there shouldn't be set time to socialise, and that connections are important. "My friends and family, that's what matters. I don't think connecting with them is a waste of time at all."

The second Q&A some other tough questions being asked, such as the reason for the frequent privacy updates. Zuckerberg said, "We update the privacy policy about once a year to reflect the product and policy changes from the last year. [..] We don't want to change it too often. It's a lot to read through and digest. Sometimes we do the changes well, sometimes we don't and get criticized. But we need to follow the technical progress of new things we can do."

Commenting on the famous 'Facebook emotion experiment', and the ensuing tightening of research guidelines, Zuckerberg said, "There was this press about a report that a Facebook data scientist released this summer, and we took it as an opportunity to tighten things up. We think the only way we can make our product better is to try out things and get feedback from the community."

Zuckerberg added, "My wife is a doctor, and there's an assumption that there's a consequence of any test you run, and there's a belief that every test's potential benefit needs to outweigh the risks. There are some things we shouldn't test. Anything with young people, or sensitive communities is something we need to be especially careful about, or anything around emotions or psychological well-being. We need to make sure people internally don't have the ability to test on things that could hurt people."

When asked about how children should be taught about Facebook, the social networking firm's CEO said, "I would follow our rules. We don't allow people under 13 to use Facebook. After that, I'd probably talk to them about it. I'd want my children to use technology to gain an understanding of the modern world and banning it isn't a way to help them learn what's out there. But you want to be in constant dialogue and make sure to report anything that's harmful. We need to continue doing our best to make sure that goes away."

The first Q&A saw Zuckerberg answering some interesting questions, from why the standalone Messenger app was forced on users for chats, to why he wears the same shirt every day. Zuckerberg also finally expressed his opinion on The Social Network movie, which had controversially pictured the events around the creation, founding and initial success of the firm.
Comments

Personally Tech With Ankur Singla, Founder and CEO Akosha.com
How to Share Files Between Android and Windows Phone With Feem