Facebook's 'Find Friends Nearby' helps locate people around you 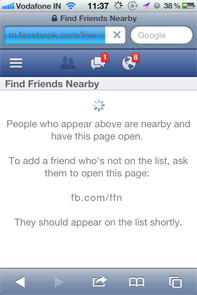 Facebook has launched a new feature called Find Friends Nearby that allows you to find other site users present nearby. The new feature which quietly came into being locates Facebook users in the vicinity via geo-location and displays them in a list.

Though it has not yet been officially announced, Find Friends Nearby is already available for mobile web users on iOS and Android via m.facebook.com/friendshake.

Users can also access the feature using the standalone Android and iOS Facebook apps on their devices. Here's how it's accessible: Menu>Apps>Find friends>Other Tools>Find Friends Nearby. This redirects to a page identical to its mobile web counterpart.

Find Friends Nearby allows users to locate their friends at events or locations without having to search them by name. But users need to be logged into Facebook and the FFN platform too. Users can see their own friends and those whom they do not know. It's important to note that the feature does not act as a friend tracker but can only be used to add new friends.

The new feature seems to stem from the idea behind Glancee, a location-based social discovery app that was recently acquired by Facebook.