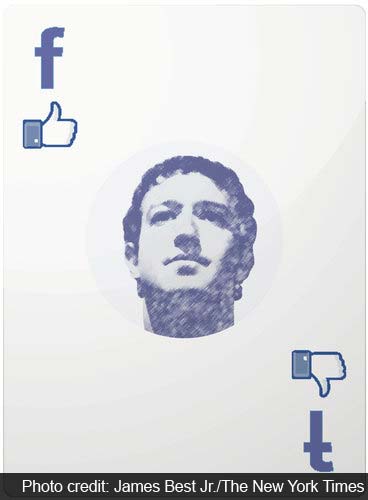 Inside Facebook's headquarters, a red-and-white poster affixed to a wall asks bluntly: "What Could Go Wrong?"

Below, in black ink, someone has scrawled in tiny letters: "Everything."

The poster, one of several displayed across this sprawling campus, is part of the company's risk-taking start-up culture, as is the fact that management has not pulled down the defaced copy. But as the company loses its luster on Wall Street, this exchange on the wall points to the improbable turn that Facebook's fairy tale has taken.

Once hailed as the most valuable technology company to hit Wall Street, Facebook is now worth just over half what it was three months ago, with shares closing at $20.01 Monday. Wall Street analysts are openly wondering whether its chief executive, Mark Zuckerberg, has the business skills to deliver on his promises.

Facebook's troubles began in earnest with an exceptionally ambitious initial public offering. Even the grown-ups that Mr. Zuckerberg, 28, chose to run the business side of the company - Sheryl Sandberg, the chief operations officer, and David Ebersman, the chief financial officer - seem not to have been skilled enough to stave off that disaster. Nor were the bankers who handled the deal, including Goldman Sachs and Morgan Stanley.

"The company is suffering from a classic disease - it went public at too high a value," said Dan Alpert, a partner with Westwood Capital, an investment bank that did not participate in the Facebook offering.

The challenge for Facebook executives, Mr. Alpert said, is to persuade the market that it is not a fad and that its managers have a blueprint for making money.

In what passes for good news for Facebook these days, Morningstar, the investment research firm, said shares were almost cheap enough to consider buying, but warned that the price had not yet hit bottom.

That twist of fate, in many ways, reflects the tension between two moneymaking cultures in America: Silicon Valley and Wall Street. They are as symbiotic as they are dismissive of each other. They are equally focused on making money, but their approaches are different.

Wall Street wants to see swift growth in revenue, given Facebook's still high valuation of around $50 billion. Facebook executives counsel patience. They say they are building tools that will forever change the world - but have yet to reveal any details about how they plan to quickly increase profits.

The important thing for Facebook is "to stay focused on the fact that we're the same company now as we were before," Mr. Ebersman said in its maiden earnings call in late July. Immediately after, the stock plummeted.

Since then, Mr. Ebersman has met with bankers on both coasts and reiterated that message.

"They think everything is going to be fine, and that everyone needs to understand Facebook better," said one analyst who heard him speak.

The company is trying to show investors that it is aggressively expanding the business, investing in expensive engineers and data centers. Certainly the public offering has stuffed the coffers with plenty of cash.

Facebook also wants it to be known that not everyone is running away from the stock. Reed Hastings, a Facebook director and the chief executive of Netflix, recently bought $1 million in shares. But that was a drop in the bucket compared with the $9 billion in shares sold by insiders at the peak public offering price. Since then, another director and an original investor, Peter Thiel, sold more than 20 million shares, according to a filing with the Securities and Exchange Commission.

Facebook executives are taking pains to show that they continue to dream big.

Doug Purdy, the director of developer products, painted Facebook's future with great enthusiasm on Friday, when shares nearly touched the half-price milestone. One day soon, he said, the Facebook newsfeed on your mobile phone would deliver to you everything you want to know: what news to digest, what movies to watch, where to eat and honeymoon, what kind of crib to buy for your first born. It would all be based on what you and your Facebook friends liked.

Facebook's algorithms would be refined so that it would all be sent to you - "pushed," in Mr. Purdy's words. You wouldn't have to search for it.

What he didn't have to say was that in this future world, you wouldn't need Google. How would Facebook profit exactly?

"There is a tremendous amount of value in here because we're providing the user experience value," he said. "That means users come back to Facebook. They come back again and again and again. That allows us to show advertising."

Mr. Purdy, tall and effusive, drew his dreams on a white board. It featured rectangles, representing mobile phones, which is exactly where Facebook faces its most urgent challenge.

"We are focused on building the right products," he said. "At the end of the day, user experience, user desire, user engagement is the highest priority for us. Without that there is no money."

There's another poster on campus: "Our mobile future," it reads. The company says it has oriented everything it does to make Facebook more attractive - and lucrative - on mobile devices. It promises to roll out new features in the coming weeks.

Analysts have pointed out that Facebook has been slow to figure out ways to make money from mobile devices; half of its users log in on phones and tablets. Given its exceptionally high valuation in its initial offering, the company is under intense pressure to show that its advertising model can deliver the lucre that Wall Street expects.

Some of the scrutiny has been on Mr. Zuckerberg's leadership. The very qualities that created the fairy tale aura around him, including his youth and ambition, are what even his admirers are questioning.

"I don't think he's doing a bad job of running the company, if that means setting the company's direction or driving product strategy," said one person who invested in the company when it was still private and who declined to be named to avoid hurting his relationship with Mr. Zuckerberg. "He's doing a very bad job of managing Wall Street."

"To Wall Street, 28-year-old C.E.O. hackers are aliens," said Sam Hamadeh, a West Coast transplant to New York who runs PrivCo, a research firm that specializes in private companies. "Sometimes that persona can help. When things go sour, they really look at you extremely skeptically."

In the technology business, few companies can keep the fairy tale alive forever. Facebook's campus was previously occupied by a once-rising technology star, Sun Microsystems. (It has since been absorbed by Oracle.)

Facebook has kept some of the original doors. They are meant to be a reminder to the staff.