The Facebook page was created back in May 2015 and was recently used to apparently run a cryptocurrency scam. 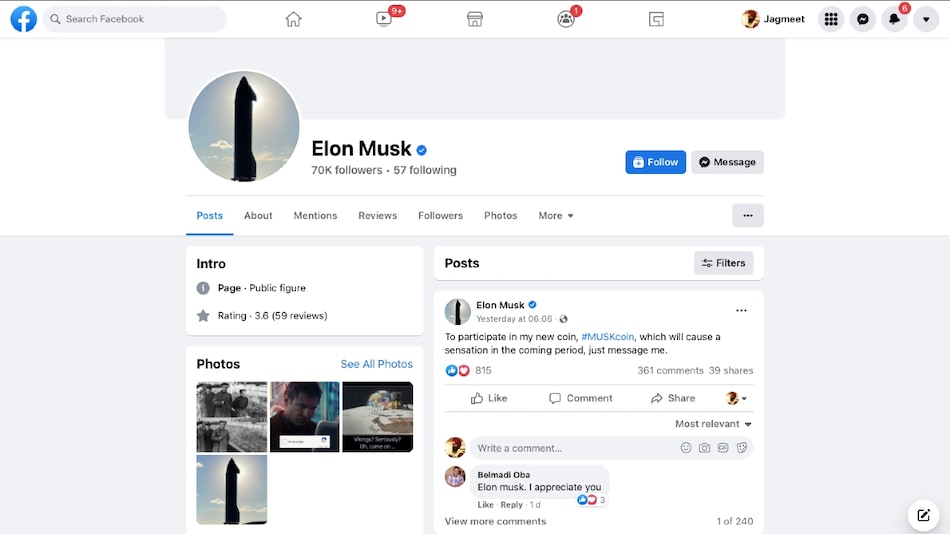 A verified Facebook page that was posing as Elon Musk and had 70,000 followers has been pulled from the social networking site. It was yet another incident just over a month after a similar Facebook page impersonating the Tesla chief appeared online. The newly discovered fan page seemed to be created by cryptocurrency scammers as one of its recent posts was found to be asking users to connect with the owner over direct messages for an unknown digital currency.

Cybersecurity researcher Ehraz Ahmed discovered the falsely verified Facebook page of Elon Musk last month. He told Gadgets 360 that he originally found the earlier Facebook page of Musk that was made unavailable in November.

“I was sure that this wasn't the end and that the scammers would come up with a similar scam. But what I didn't expect was that the new fake page would pop up so soon,” the Bengaluru-based researcher said.

The page in question was created back in May 2015, as per the details available on the About section. Interestingly, it did not undergo any name changes which was not the case with the previous verified page that appeared and was removed last month as that received name updates at least six times in 2021 and was originally created to represent a “Kizito Gavin” — the reversed name of Uganda football player Gavin Kizito.

Although the name on the Facebook page was accurate and correctly spelled, its URL was misspelt and was seen as https://www.facebook.com/ellonnmusk. This itself hinted at something fishy. Further, the verified page showed it was managed by some people from Germany and Spain. Musk is notably based in Texas and not in Europe.

Ahmed stated that both earlier and the newly discovered Facebook pages appeared to be a part of a cryptocurrency scam.

The news about another verified Facebook page of Musk was first reported by Web News Observer last week. However, Gadgets 360 was able to independently verify that the page was live until Monday, and it was removed shortly after we discussed its details with Facebook parent Meta. The company, though, did not respond to multiple requests for a comment on the matter.

It is not yet clear whether the page was removed by Facebook or directly from its owners.

Facebook as “lame”
Musk, who has been quite active on Twitter, in February last year called Facebook “lame” in a tweet that carried the hashtag: #DeleteFacebook. It was in response to an anti-Facebook tweet posted by Hollywood actor and producer Sacha Baron Cohen. However, it wasn't the first time that the 50-year-old billionaire showed his detachment with the social networking platform.

In 2018, Musk said in that year and called Facebook lame at the time.

Musk has also not officially been on Meta's Instagram since August 2018.

Ineffective despite rigorous verification process
Facebook says in a support page that the verified badge confirms that the page or profile on its platform has the authentic presence of the public figure or brand it represents. The company claims that it considers “a number of factors when evaluating Facebook Pages and profiles to determine whether they're in the public interest and meet our verification criteria.” It also asks for an official identification document such as a driving licence or passport of the page or profile owner for verification. However, it seems that such a rigorous process does not help restrict fake verifications.

“For Facebook to be making such egregious errors as authenticating this fake Elon Musk account strongly suggests that the company simply has not put sufficient resources into human-centric review process and are instead hoping its artificial intelligence (AI) systems will work well enough — and they probably do work well in many instances but we know they will also fail in many particular instances,” said Noah Giansiracusa, a professor at Bentley University in Boston.

Facebook has been notorious for allowing fake news and misinformation on its platform. The platform did try to resolve these problems by bringing updates in the recent past, but fake and duplicate users is one of the issues that it has not yet been successfully addressed.

In an earnings call in 2018, Meta CFO David Wehner acknowledged the problem of duplicate users. He stated that “the Facebook MAU number does count multiple accounts for a single user when such accounts exist, and we estimate those represent approximately 10 percent of our Facebook MAUs as previously disclosed in the limitation of key metrics section in our SEC filings.”

Giansiracusa told Gadgets 360 that by considering Facebook having limited control over removing duplicate and fake accounts, it suggests that the platform's AI algorithms are not efficient and are ineffective in taking action against impersonating profiles.

“With fake accounts like this Elon Musk one, I'm left wondering whether Facebook actually cares enough to really tackle this problem — because even these fake accounts draw large amounts of engagement and hence bring profit to Facebook, so what's the real incentive for the company to rein them in?” he asked.