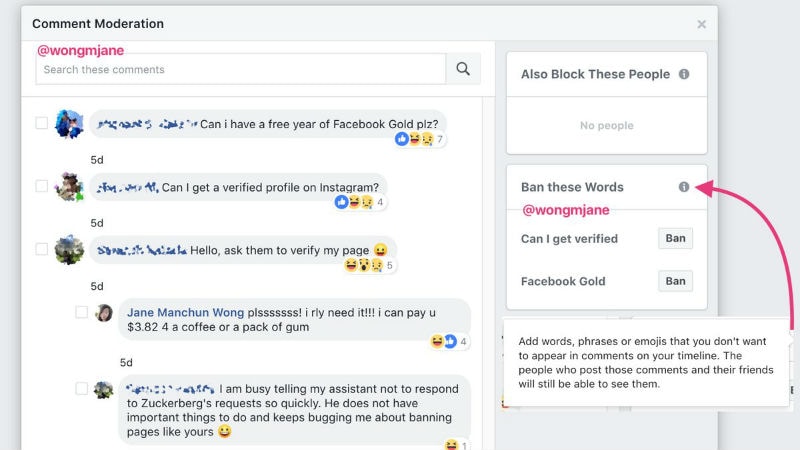 Facebook is reportedly testing an interesting new feature that will help users combat abuse, bullying, and harassment on the platform. Online harassment has been a major issue that has plagued most social media websites for a long time now. Facebook, for its part, has been taking a number of actions to fight against the issue, and the upcoming feature appears to be another one in the lineup. According to a developer, Facebook users will soon be able to block comments containing particular words, phrases, or emoji from appearing on their personal timelines.

As per a post by developer Jane Wong on Twitter, the new Facebook feature will allow you to select a particular word, a group of words, or even emojis that you do not want to appear in your timeline. Wong also shared a screenshot of the feature that is currently under development. As per the image, when you block certain words Facebook will notify that the users who post the comments and their friends will still be able to see them.

The new comment filtering feature is quite similar to the one that Facebook-owned Instagram already has. Instagram has been allowing users to filter comments, using default keywords and custom keywords, for a long time now. Similarly, Twitter also has a feature called Muted Words that lets users ban particular words from their timelines.

Facebook Was Warned of Alleged Russian Meddling Back in 2014
Xiaomi Redmi 4A Gets MIUI 10 Stable Update, Redmi 4 Reportedly Receiving It Too