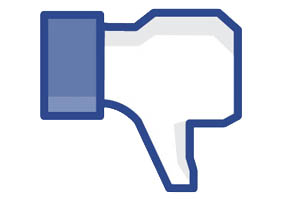 Unhappy with Facebook's first financial report as a public company Thursday, investors fled the stock in droves even as Mark Zuckerberg, the company's chief executive, extolled its growth prospects to industry analysts.

"The shift towards mobile is incredibly important," Mark Zuckerberg, chief of Facebook, said during an analysts' call.

Facebook's stock lost 18 percent of its value Thursday. The first blow came during regular trading largely because of the poor results posted by Zynga, the social game company that uses Facebook as a platform.

But the stock continued to plummet in after-hours trading after Facebook announced its own numbers, dipping below $24, a record low. Since going public two months ago at $38 a share, Facebook shares have lost 37 percent of their value.

Mr. Zuckerberg has rarely spoken publicly about the company he built in his dorm room eight years ago. But nothing he and his lieutenants said Thursday about their plans to make money by advertising to Facebook users seemed to reassure investors.

"Obviously we're disappointed about how the stock is traded," said David Ebersman, the chief financial officer. "But the important thing for us is to stay focused on the fact that we're the same company now as we were before."

The financial report for the company's second quarter did contain some good news. Revenue was up 32 percent, beating analysts' predictions. But profits were not impressive, and the total number of users inched up only slowly.

"With the unprecedented hype around the company's I.P.O., some investors believe more upside would have materialized - higher revenues, higher earnings," said Jordan Rohan, an analyst at Stifel Nicolaus.

During the call with analysts, company executives emphasized their efforts to make Facebook accessible on mobile devices. The company only recently started surfacing advertisements in the mobile newsfeed. And while company executives said they were seeing promising results, they also said they were being careful not to crowd the mobile platform with too many advertisements, lest it spoil the user experience.

The company said 543 million people looked at Facebook on their mobile devices at the end of June, a 67 percent jump from last year.

"The shift towards mobile is incredibly important," Mr. Zuckerberg said during the call.

The company said its revenue for the quarter climbed to $1.18 billion, from $895 million; most of it came from advertising. The company reported a net loss of $157 million, or 8 cents a share, compared with net income of $240 million, or 11 cents a share for the same quarter last year. Much of that was because of stock compensation, and on an adjusted basis, the company posted a profit of 12 cents a share, or $295 million, meeting analysts' expectations.

Facebook, which already has nearly a billion users worldwide, is facing an inevitable slowdown in growth. The real issue, analysts have said, is whether the company can keep users glued to the site and profit from them by offering targeted advertisements, particularly on mobile devices.

"Before they were a public company, Facebook was judged by growth in users," said Colin Sebastian, an analyst at Robert W. Baird & Company. "Now that they are so well penetrated in most Western markets, growth has to translate into monetization."

Of particular concern, said Mark Mahaney, a Citibank analyst, is whether users are spending as much time on the site every day, considering how many more advertisements they are seeing on both mobile and desktop platforms. "Could you see Facebook fatigue? Could you see users using it less?" Mr. Mahaney asked.

Facebook, which is based in Menlo Park, Calif., made its debut on Wall Street in May. Investors were not expecting to see rosy earnings during this quarter, analysts said. Several said that the company would enjoy a grace period of sorts until early 2013 at least, but that it needed to lay out a clear road map to growing profits.

Advertising is Facebook's principal moneymaker; the sale of mostly virtual goods on Zynga makes up the rest. But Facebook is widely thought to have other channels to make money. Its crown jewel is what its users share about themselves, including who they are, where they went to school, pictures of their children, political predilections and what they read and listen to.

Facebook has been aggressively experimenting with how to exploit all this data for its advertising efforts. It is testing how to sell advertisements elsewhere on the Web. And through its newest advertising tool, Facebook Exchange, it tracks the behavior of its users when they are visiting other sites and then serves up tailored advertisements when they return to Facebook.

Facebook has also been experimenting with so-called Sponsored Stories, which turn a user's "like" of a certain brand into a product endorsement to his or her Facebook friends. On the earnings call, company executives said this kind of advertising was more lucrative than others. They said they planned to introduce more of these advertisements in the mobile and desktop platforms.

"We believe the best type of advertising is a message from their friends," Mr. Zuckerberg said.

But the Sponsored Stories are at the center of a legal dispute. In a pending settlement of a class-action lawsuit, Facebook has agreed to make potentially costly changes to how these advertisements work.

The company has been aggressive in obtaining tools and talent to address its mobile challenge. In recent weeks it acquired a number of start-ups, including Glancee, a location sharing app whose creators are based in San Francisco; Face.com, an Israeli facial recognition technology company; and Acrylic Software, a Canadian application developer.

Brian Wieser, an analyst with Pivotal Research Group, said Facebook was such a new kind of company that it was difficult to know how to measure its progress.

"It is not a utility, it is not a newspaper, it's not manufacturing," he said. "It is unproven in terms of its durability."