Facebook Messenger for Windows and Firefox shutting down on March 3 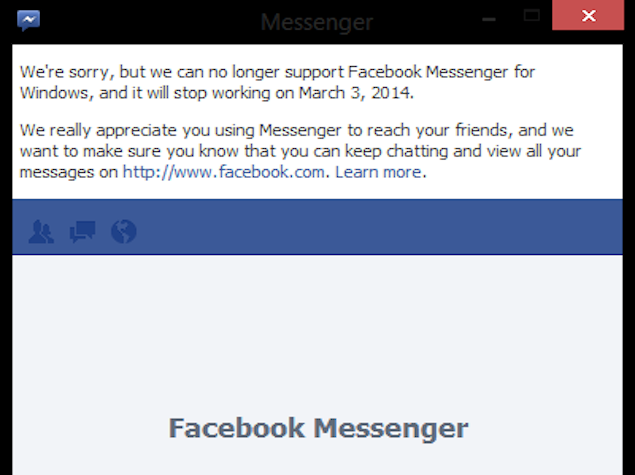 Facebook Messenger for Firefox is also being shut down on March 3, and users are receiving the same message as the one above. While the social networking giant on Tuesday also pulled the plug on its other less-used platform, Facebook Email, the news that it has decided to shut down Facebook Messenger for Windows and Firefox, is not something completely unexpected.

The move reiterates how Facebook is looking to move its base completely to mobile devices, given that it is most used on these platforms. Notably, Microsoft at MWC 2014 on Sunday made the announcement that Facebook Messenger was coming to Windows Phone.

Facebook Messenger for Windows was released in March 2012, and for Firefox in December 2012. There had been unconfirmed reports that Facebook Messenger would even come to the Mac OSX platform, but in the light of the service moving away from desktops to concentrate on the mobile platform, this is now something that looks unrealistic.

Shifu review
MWC 2014: Lots of innovations beyond iOS and Android