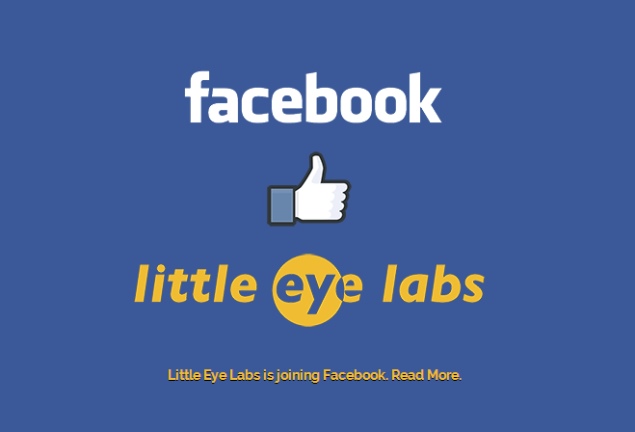 Facebook's acquisition of Little Eye Labs, a Bangalore-based start-up has been rumoured for a while. The startup, which builds mobile app analysis tools for app developers and testers, announced on Wednesday that the acquisition had been completed.

According to the post titled 'transition' on the website of Little Eye Labs, after the acquisition, the Little Eye Labs team will work closely with Facebook to improve their mobile development and take it to a new level. The startup also jubilantly declared: "This is Facebook's first acquisition of an Indian company, and we are happy to become part of such an incredible team."

Interestingly, the entire Little Eye Labs team will move to Facebook's headquarters in Menlo Park, from where they can "leverage Facebook's world-class infrastructure." Little Eye Labs released the first official version of the Little Eye analysis tool for Android in April 2013.

The company also reassured its current customers, saying they will receive further information on plans to offer a free version of Little Eye until June 30, 2014.

Little Eye Labs, was founded in May 2012 by Giridhar Murthy, Kumar Rangarajan (also the CEO of the company), Satyam Kandula, and Lakshman Kakkirala. Murthy has worked at Apple; Rangarajan at IBM and HP, Kandula is an IIT Kharagpur alumni and Kakkirala has earlier worked with IBM and Yahoo.

In addition Kumar Rangarajan, who is the current CEO of Little Eye Labs, said that they are excited to work alongside the team at Facebook. "We'll continue on our mission of building analysis tools to aid the development of mobile apps," he added.

As far as the funding for Little Eye Labs is concerned, it received the seed capital from both GSF Superangels and also from Venture East Fund. According to the report that was published earlier by Business Standard, they had received an investment between $100,000 - $200,000 from GSF.

While the terms of the deal were not disclosed, TechCrunch reports Facebook paid between $10 and $15 million to acquire the Indian startup.

CES 2014: Qualcomm to focus on tablets and car-connectivity in 2014
HP Slate 6 Voice Tab with voice-calling spotted in Bluetooth SIG filing