Users will no longer have the option to switch to the classic design from the new interface. 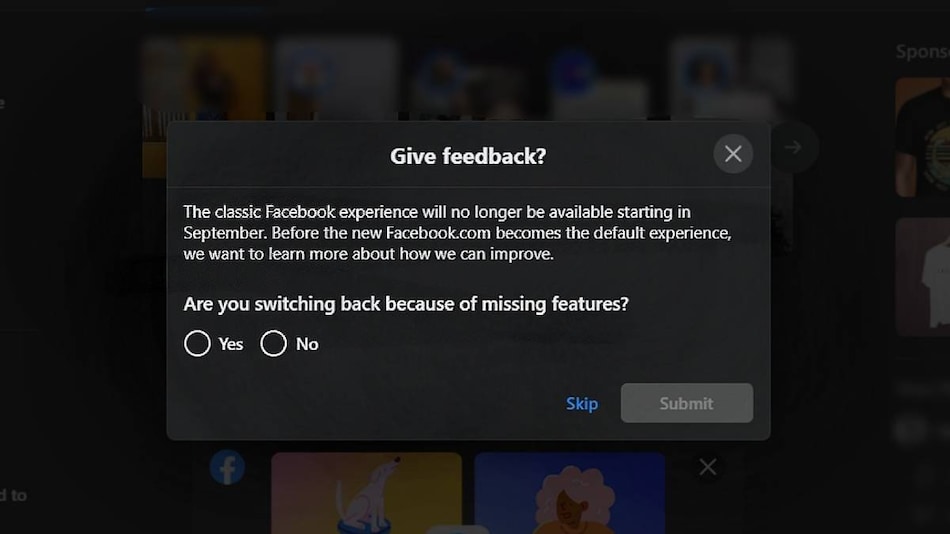 Currently, users have the choice to switch back to the classic design that some prefer due to familiarity

Facebook will be discontinuing its classic design in September, making it mandatory for everyone to use the new interface that started rolling out this year after being unveiled in 2019. Currently, users have the choice to switch back to the classic design that some prefer due to familiarity. The new design looks less cluttered, has a more modern look, is available in dark mode, and doesn't have Facebook's classic blue navigation bar.

A dialogue box has been appearing for Facebook users attempting to shift back to the classic interface, warning them that the classic Facebook experience will no longer be available starting September. The social networking giant urged users to try the new version before it became the default experience, and let Facebook know how it could improve.

Along with usual instructions on how to switch back to the classic Facebook, the company's support page is informing users that starting September, everyone will have the new design.
The new interface has a cleaner layout, more white space, and less clutter. It has a more streamlined navigational approach, and it is easier to search for and locate groups, games, and videos. However, it may take some time for those used to the classic Facebook layout to adapt to these changes.

While rolling out the new Facebook design earlier this year, the social media giant had said that users would have the option to switch to the classic Facebook until it becomes the default later this year. To recall, Mark Zuckerberg had revealed Facebook's plans of launching a major redesign for the desktop in April last year, saying that “the future is private.” It had started to roll out the new design to majority of its users from March of this year, making it available for everyone in May.