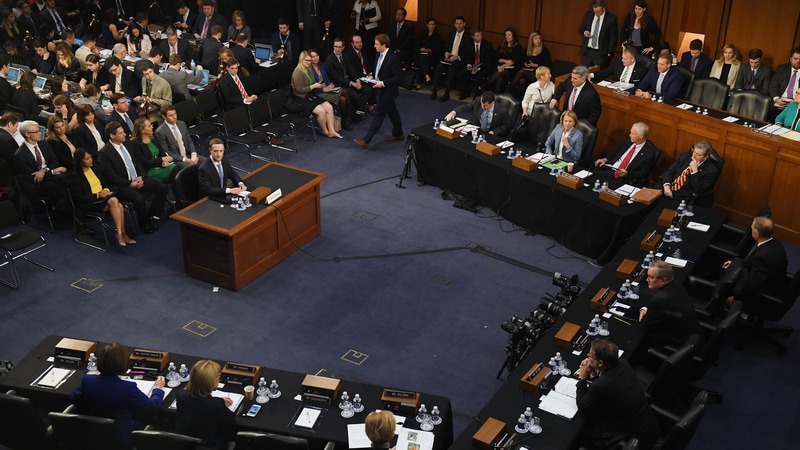 The senators and the Facebook founder spoke different languages, and there was no simultaneous translation.

Born long before the digital era took hold, the mostly grey-haired members of the Senate Judiciary and Commerce committees came to grill Mark Zuckerberg, the errant 33-year-old CEO who came before them in his uncustomary suit and periwinkle tie on Tuesday afternoon.

And for very good reason, since Facebook - where billions of people all over the world get their news, whether true or false - has been incredibly irresponsible and cavalier with users' personal information. That was made clear last month in the blockbuster news that Facebook had allowed the phone numbers, emails and in some cases text messages of 87 million users to get into the hands of a data firm, Cambridge Analytica, bent on electing Donald Trump as president.

But what happened at the hearing instead was mostly a gentle, respectful tutorial from Zuckerberg on how the giant social media platform works.

"It would be cool to see Zuckerberg questioned by people who know how Facebook works," tweeted Dan Pfeiffer, co-host of Pod Save America.

The hearing should give everyone serious pause if they think that federal legislation is going to solve the serious and growing issues of technology run amok.

For one simple reason: Legislators don't seem to understand it well enough to even ask the right questions, much less fix the problem.

Not that there wasn't plenty of senatorial bombast.

"If Facebook and other online companies will not or cannot fix these privacy invasions, then we will," warned Sen. Bill Nelson, Fla., the ranking Democrat on the Commerce Committee.

Nelson, 75, started out by stating his less-than-convincing digital bona fides: "From the moment we get up, we're on those handheld . . ." and here he paused, searching for the right word and finishing up with a flourish: ". . . tablets."

And 84-year-old Sen. Orrin Hatch, R-Utah, tried his best but continued to call the largest tech platforms "websites," as if referring to Zappos.com. Then he teed up a question so basic about Facebook's business model that Zuckerberg answered it in four words: "Senator, we run ads."

That's not to say, of course, that there aren't plenty of people in their 70s and 80s who understand technology. The issue here is less about age than about familiarity and knowledge. (And undoubtedly some members of Congress are tech-savvy.)

Meanwhile, Facebook couldn't be more powerful in our society. Zuckerberg - as is his wont - admitted to error and apologised. "It was my mistake, and I'm sorry," he said.

He sounded as if he had broken a vase, not a democracy.

But the entire purpose of Facebook is to make money by treating its users as the product that it sells to advertisers. Anything that impedes that is going to be extraordinarily unwelcome - and thoroughly resisted - despite Zuckerberg's insistence to the contrary.

During Tuesday's hearing, he described the mission of the company he founded in a Harvard dorm room (and there were far too many mentions of those Ivy League roots) as "connecting people."

"Facebook," he said, "is an idealistic and optimistic company."

Maybe so, but it's also a company whose excesses, whose opacity, whose ability to deny the undeniable and whose straight-up wrongdoing are a major problem in America and in the world.

Something needs to be done about that. Meaningful self-regulation is laughable.

But unfortunately, so is the idea that Congress can manage the job.

It's Not Just America: Zuckerberg Has to Answer for Facebook's Actions Around the World
Redmi Note 5 Pro Will Be Up for Pre-Orders via Mi.com on Friday at 12pm: Xiaomi