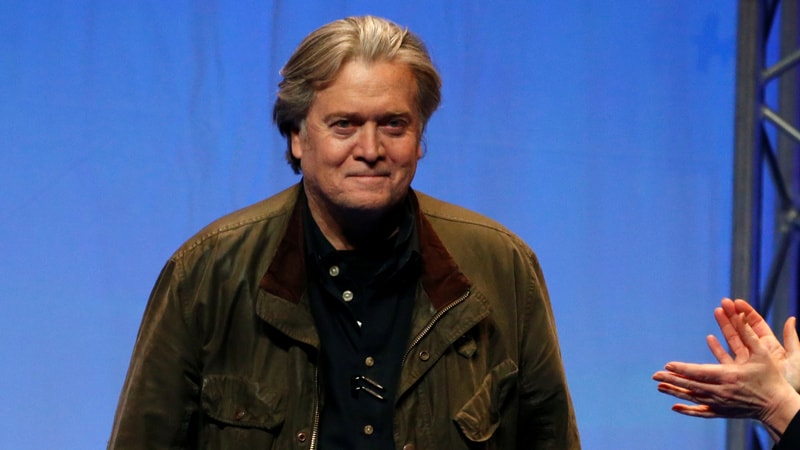 The 2014 effort was part of a high-tech form of voter persuasion touted by the company, which under Bannon identified and tested the power of anti-establishment messages that later would emerge as central themes in President Donald Trump's campaign speeches, according to Chris Wylie, who left the company at the end of that year.

Among the messages tested were "drain the swamp" and "deep state," he said.

Cambridge Analytica, which worked for Trump's 2016 campaign, is now facing questions about alleged unethical practices, including charges that the firm improperly handled the data of tens of millions of Facebook users. On Tuesday, the company's board announced that it was suspending its chief executive, Alexander Nix, after British television released secret recordings that appeared to show him talking about entrapping political opponents.

More than three years before he served as Trump's chief political strategist, Bannon helped launch Cambridge Analytica with the financial backing of the wealthy Mercer family as part of a broader effort to create a populist power base. Earlier this year, the Mercers cut ties with Bannon after he was quoted making incendiary comments about Trump and his family.

In an interview Tuesday with The Washington Post at his lawyer's London office, Wylie said that Bannon - while he was a top executive at Cambridge Analytica and head of Breitbart News - was deeply involved in the company's strategy and approved spending nearly $1 million (roughly Rs. 6.5 crores) to acquire data, including Facebook profiles, in 2014.

"We had to get Bannon to approve everything at this point. Bannon was Alexander Nix's boss," said Wylie, who was Cambridge Analytica's research director. "Alexander Nix didn't have the authority to spend that much money without approval."

Bannon, who served on the company's board, did not respond to a request for comment. He served as vice president and secretary of Cambridge Analytica from June 2014 to August 2016, when he became chief executive of Trump's campaign, according to his publicly filed financial disclosure. In 2017, he joined Trump in the White House as his chief strategist.

Bannon received more than $125,000 in consulting fees from Cambridge Analytica in 2016 and owned "membership units" in the company worth between $1 million and $5 million, according to his financial disclosure.

Cambridge Analytica did not respond to a request for comment about Bannon's role.

It is unclear whether Bannon knew how Cambridge Analytica was obtaining the data, which allegedly was collected through an app that was portrayed as a tool for psychological research but was then transferred to the company.

Facebook has said that information was improperly shared and that it requested the deletion of the data in 2015. Cambridge Analytica officials said that they had done so, but Facebook said it received reports several days ago that the data was not deleted.

Wylie said that both Bannon and Rebekah Mercer, whose father, Robert Mercer, financed the company, participated in conference calls in 2014 in which plans to collect Facebook data were discussed, although Wylie acknowledged that it was not clear they knew the details of how the collection took place.

Bannon "approved the data-collection scheme we were proposing," Wylie said.

The Mercers did not respond to a request for comment.

The data and analyses that Cambridge Analytica generated in this time provided discoveries that would later form the emotionally charged core of Trump's presidential platform, said Wylie, whose disclosures in news reports over the past several days have rocked both his onetime employer and Facebook.

"Trump wasn't in our consciousness at that moment; this was well before he became a thing," Wylie said. "He wasn't a client or anything."

The year before Trump announced his presidential bid, the data firm already had found a high level of alienation among young, white Americans with a conservative bent.

In focus groups arranged to test messages for the 2014 midterms, these voters responded to calls for building a new wall to block the entry of illegal immigrants, to reforms intended the "drain the swamp" of Washington's entrenched political community and to thinly veiled forms of racism toward African Americans called "race realism," he recounted.

"The only foreign thing we tested was Putin," he said. "It turns out, there's a lot of Americans who really like this idea of a really strong authoritarian leader and people were quite defensive in focus groups of Putin's invasion of Crimea."

The controversy over Cambridge Analytica's data collection erupted in recent days amid news reports that an app created by a Cambridge University psychologist, Aleksandr Kogan, accessed extensive personal data of 50 million Facebook users. The app, called thisisyourdigitallife, was downloaded by 270,000 users. Facebook's policy, which has since changed, allowed Kogan to also collect data - including names, hometowns, religious affiliations and likes - on all of the Facebook "friends" of those users. Kogan shared that data with Cambridge Analytica for its growing database on American voters.

Facebook on Friday banned the parent company of Cambridge Analytica, Kogan and Wylie for improperly sharing that data.

The Federal Trade Commission has opened an investigation into Facebook to determine whether the social media platform violated a 2011 consent decree governing its privacy policies when it allowed the data collection. And Wylie plans to testify to Democrats on the House Intelligence Committee as part of their investigation of Russian interference in the election, including possible ties to the Trump campaign.

Meanwhile, Britain's Channel 4 News aired a video Tuesday in which Nix was shown boasting about his work for Trump. He seemed to highlight his firm's secrecy, at one point stressing the need to set up a special email account that self-destructs all messages so that "there's no evidence, there's no paper trail, there's nothing."

The company said in a statement that Nix's comments "do not represent the values or operations of the firm and his suspension reflects the seriousness with which we view this violation."

Cambridge Analytica was set up as a US affiliate of British-based SCL Group, which had a wide range of governmental clients globally, in addition to its political work. Wylie said that Bannon and Nix first met in 2013, the same year that Wylie - a young data whiz with some political experience in Britain and Canada - was working for SCL Group. Bannon and Wylie met soon after and hit it off in conversations about culture, elections and how to spread ideas using technology.

Bannon, Wylie, Nix, Rebekah Mercer and Robert Mercer met in Rebekah Mercer's Manhattan apartment in the fall of 2013, striking a deal in which Robert Mercer would fund the creation of Cambridge Analytica with $10 million, with the hope of shaping the congressional elections a year later, according to Wylie. Robert Mercer, in particular, seemed transfixed by the group's plans to harness and analyze data, he recalled.

The Mercers were keen to create a US-based business to avoid bad optics and violating US campaign finance rules, Wylie said. "They wanted to create an American brand," he said.

Cambridge Analytica initially worked for 2016 Republican candidate Sen. Ted Cruz, Texas, who was backed by the Mercers. The Trump campaign had rejected early overtures to hire Cambridge Analytica, and Trump himself said in May 2016 that he "always felt" that the use of voter data was "overrated."

After Cruz faded, the Mercers switched their allegiance to Trump and pitched their services to Trump's digital director, Brad Parscale. The company's hiring was approved by Trump's son-in-law, Jared Kushner, who was informally helping to manage the campaign with a focus on digital strategy.

Kushner said in an interview with Forbes magazine that the campaign "found that Facebook and digital targeting were the most effective ways to reach the audiences. . . . We brought in Cambridge Analytica." Kushner said he "built" a data hub for the campaign "which nobody knew about, until towards the end."

Kushner's spokesman and lawyer both declined to comment Tuesday.

Two weeks before Election Day, Nix told a Post reporter at the company's New York City office that his company could "determine the personality of every single adult in the United States of America."

The claim was widely questioned, and the Trump campaign later said that it didn't rely on psychographic data from Cambridge Analytica. Instead, the campaign said that it used a variety of other digital information to identify probable supporters.

Parscale said in a Post interview in October 2016 that he had not "opened the hood" on Cambridge Analytica's methodology, and said he got much of his data from the Republican National Committee. Parscale declined to comment Tuesday. He has previously said that the Trump campaign did not use any psychographic data from Cambridge Analytica.

Cambridge Analytica's parent company, SCL Group, has an ongoing contract with the State Department's Global Engagement Center. The company was paid almost $500,000 to interview people overseas to understand the mind-set of Islamist militants as part of an effort to counter their online propaganda and block recruits.

Heather Nauert, the acting undersecretary for public diplomacy, said Tuesday that the contract was signed in November 2016, under the Obama administration, and has not expired yet. In public records, the contract is dated in February 2017, and the reason for the discrepancy was not clear. Nauert said that the State Department had signed other contracts with SCL Group in the past.