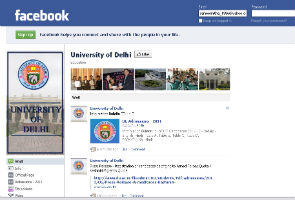 Highlights
With its helplines and open-days flooded with pre-admission queries, Delhi University today launched its Facebook page for students, giving them another avenue to sort out their questions, raise grievances and offer suggestions.

At the first Open Day at the South campus, officials of the University were bombarded by a series of questions by curious students and concerned parents as they sought to clear their doubts about the new admission norms and other details and nuances of several courses.

Vice Chancellor Dinesh Singh said at the institution's social networking profile, a link to which is available on the University's website, he will himself try to answer several of the queries posted by students..

Speaking to aspirants, the Vice Chancellor also advised them to opt for the subjects they actually have aptitude for rather than running after market trends. "We are today launching our Facebook page, a dedicated email id is also in place. I'll do my best to personally answer several queries," he said.

The University officials said they are also making available the option of e-open days whereby presentations will be posted on the University website.

"We are also launching e-open days and e-brochures. This will help local students as they will not have to move around the city in the heat and also outstation students who can avail of the information benefits from their own cities," said Dean Students' Welfare J M Khurana.
Comments