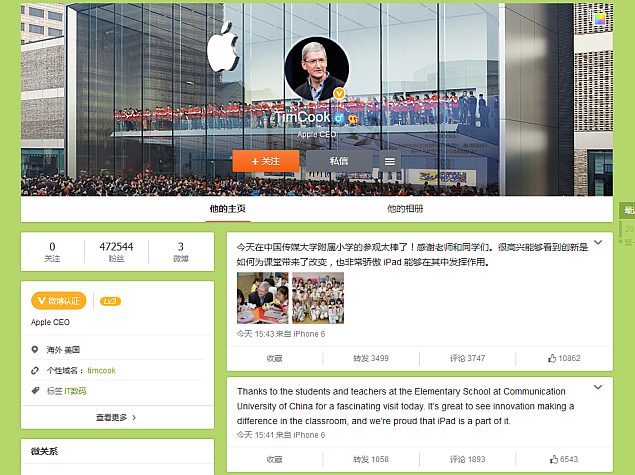 Others were a little more specific, asking Cook if he had used a Xiaomi phone or the Mi Band. Some wanted a little help getting the Apple Watch, a product that's been in short supply since its debut. Most, however, were curious about a series of penguin images that were posted on Cook's Weibo account, a phenomenon that was later attributed to default images that Windows ships with.

Indian Prime Minister Narendra Modi recently joined Weibo, ahead of his visit to China this week. In the days that have passed, Modi has accumulated less than 50,000 followers at the time of writing.  By Tuesday, Tim Cook already had over 470,000 followers, eclipsing Modi by a huge margin.

While some may consider the disparity to be quite shocking, with Cook garnering nearly 10 times Modi's Weibo followers in a single day, it is in truth not so surprising. The Apple CEO represents the face of the company that not only creates thousands jobs in the country, but is also frequently amongst the top smartphone manufacturers.

China is the world's number one smartphone market, and doing well in the country is very important to any company that wants to enjoy profits from high volume sales possible there. Apple's record quarter in Q4 2014 was in a big part due to its sales in China, with the already iPhone-loving population even more enthused with the company's first large screen smartphones.

Is Facebook Getting Ready to Launch eBay-Like Features?
How to Share Your Steam Games With Friends and Family