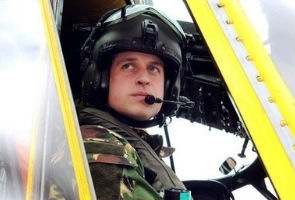 Highlights
The man not yet king of England is facing his sternest test yet. Public expectations are high. The event is to be played out across a challenging new medium of communication, and the family turns to professionals for help.

Is it the story of William Windsor and a certain royal wedding circa 2011? Or is it 'Bertie' Windsor and the King's Speech, made to the nation in 1939 on the then new-fangled medium of radio?

When Prince William and Kate Middleton marry on April 29, they will be the 16th royal couple to wed in WestminsterAbbey -- but they will be the first to have their nuptials played out, in real time, as a global web event.

In a sign of the digital times, William's official residence, Clarence House, in November chose Twitter, along with an old-fashioned press release, to announce his engagement to his university sweetheart.

With over 28,000 followers on the microblogging site, the @ClarenceHouse page has been regularly used to reveal details about the ceremony.

Communicating its message to its subjects is nothing new for the royal family -- it has been part of the monarchy's arsenal since the days of Henry V at Agincourt and Elizabeth I rallying the troops before the Armada.

The first radio speeches introduced to the future George VI in the 1930s were a landmark change, followed by TV chats, and today, full-blown online communication.

"In using these social media sites we are able to communicate with a wider audience in new and creative ways," Nick Loughran, press officer to Prince William, told AFP.

Tim Jordan, senior lecturer in media at King's College London, says the web helps the publicly-funded monarchy to justify its existence in a time of deep economic malaise.

"They're using the Facebook and Twitter pages to make it clear how much work they do, particularly the more minor members of the royal family who don't get so much media attention elsewhere," he told AFP.

He said the Facebook page allows the royalty to gather public feedback on their activities, noting that its administrators do not always remove derogatory comments.

For Charlie Beckett, director of the POLIS media think tank, this two-way communication is a crucial means for the royal family to regain legitimacy lost after the death of William's mother Princess Diana in a 1997 car crash.

The royals caused a huge public outcry by refusing, initially at least, to publicly express any grief over the death of Diana, who was by that time divorced from heir-to-the-throne Prince Charles.

Public opinion was "teetering on the republican" side, says Beckett, adding: "The royal family never wants to be seen as out of touch again.

"This allows them to say to the British public, 'Come and post comments, even if you are a bit cross with us -- we are human, we are friendly.'"

But the rise of social media may work against the royal family.

Anti-monarchists are using Facebook to organize protests against the cost of the wedding, amid steep public spending cuts by the coalition government. So far more than 500 people have signed up for a rally on the big day.

Other web-users simply see the wedding as a chance to have some royal fun.

Spoof accounts are also creeping onto the main social networking sites. One cheeky Twitter page, @William_HRH, has over 10,000 followers. "Dear deluded subjects, if you have yet to receive your invitation, chances are you never will," the faux prince tweets.

Jordan expects the wedding to be among the top trending topics on Twitter on the day, adding: "I expect 'Kate Middleton's hair' will be a popular topic."

An official mobile phone app telling the story of seven past royal weddings has been released but it will have to compete with a host of unofficial apps, ranging from photo galleries to clocks counting down to the big day.

Meanwhile an audio recording of the wedding ceremony will be available for almost instant download on iTunes, and officials are considering streaming the event live on the official website.

Traditionalists need not worry that the pace of technological change in the royal household is out of control, however. "Save-the-date" notices to European royals were sent out, 1980s style, by fax.
Comments