Ahead of Mother's Day, Facebook Is Adding Ways for You to Show Affection 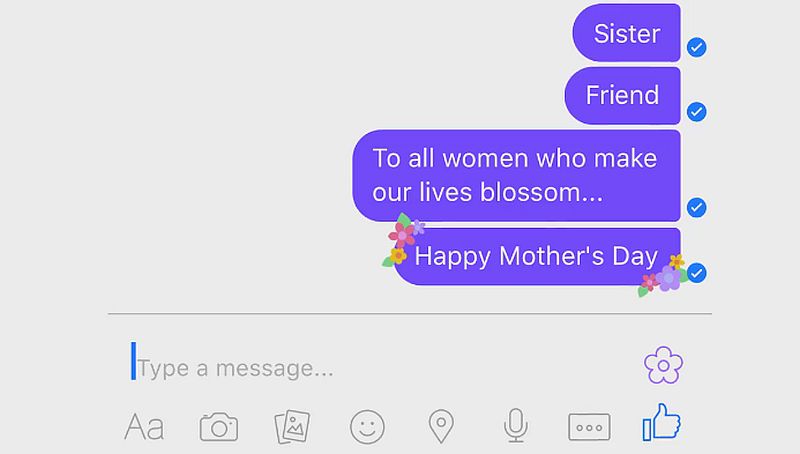 Highlights
Facebook is all set to roll out a couple of features ahead of Mother's Day. Facebook has added testing a new feature on the Messenger app that lets users decorate their messages with flowers by just tapping on the flower icon in the compose popup. On tapping, Messenger will automatically add flowers to the messages.

Facebook says that the limited-period capability will be available to users by Saturday latest and will be removed on Monday.

Announcing the new feature, Messenger's Lead David Marcus wrote in a Facebook post, "Moms are amazing, and they deserve celebrating, even on Messenger! We've built a limited-time capability to enable you to decorate your messages with flowers for Mother's Day so you can put a smile on the face of that most special person in your life. The feature will become available by May 7 latest, and will go away after Mother's Day on May 9."

Marcus adds that users on both Android and iOS will have to download the latest version of the Messenger app.

Apart from the decorating messages, Facebook is also testing a new reaction for the Mother's day on Sunday.

According to a Twitter user, the 'Flower' reaction is now appearing alongside other reactions which were made available to Facebook users earlier this year. With the addition of 'Flower' reaction, the company is also expected to remove the 'Yay' and 'Confused' reactions to make enough space.

A Facebook representative confirmed the test to The Verge and said, "To celebrate Mother's Day, we are testing the ability for people in a few markets to leave a flower reaction."

As of now, Facebook has not revealed the markets which will be receiving the new reaction focused on Mother's Day. The Verge says the 'Flower' reaction will be not available in the US.

The new reaction testing also hints that Facebook may in the future change its reactions for specific days and select markets.