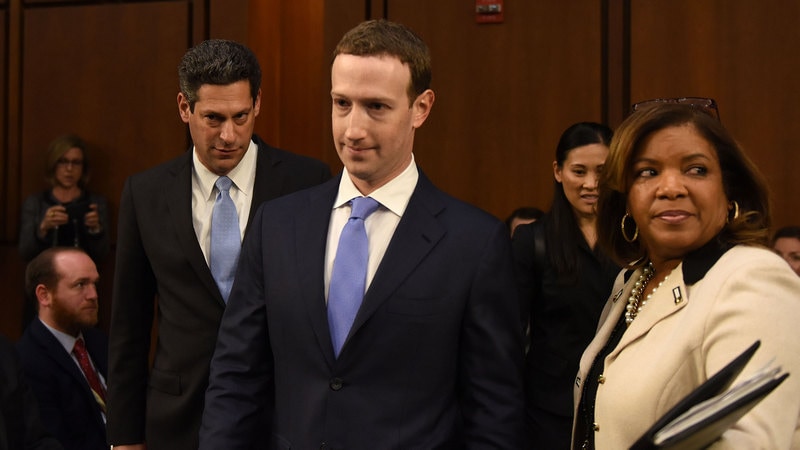 Zuckerberg was on Capitol Hill because personal information about an estimated 87 million Facebook users may have been improperly shared with the data firm Cambridge Analytica. Sen. Charles Grassley, R-Iowa asked whether there have been similar breaches involving other companies.

"We believe that we're going to be investigating many apps - tens of thousands of apps," Zuckerberg said without citing specific examples. "And, if we find any suspicious activity, we're going to conduct a full audit of those apps to understand how they're using their data and if they're doing anything improper. If we find that they're doing anything improper, we'll ban them from Facebook, and we will tell everyone affected."

It is possible, in other words, that Facebook will discover additional abuses.

This is unsurprising, because Mueller is investigating Russian interference in the 2016 presidential election, which involved the use of Facebook to spread disinformation. Still, it is notable that Zuckerberg confirmed the company's cooperation with Mueller's team.

"I actually am not aware of a subpoena - I believe that there may be [one] - but I know we're working with them," Zuckerberg said.

He added that he has not been interviewed by the special counsel's team but answered "I believe so" when asked whether other Facebook staffers have.

"I want to be careful here because that - our work with the special counsel is confidential," he said, "and I want to make sure that, in an open session, I'm not revealing something that's confidential."

Zuckerberg couldn't, or wouldn't, answer some questions about how Facebook tracks users

"There have been reports that Facebook can track a user's Internet browsing activity, even after that user has logged off of the Facebook platform," Sen. Roger Wicker, R-Miss., said. "Can you confirm whether or not this is true?"

"Senator, I want to make sure I get this accurate, so it would probably be better to have my team follow up afterwards," Zuckerberg replied.

In a similar exchange, Sen. Roy Blunt, R-Mo., asked whether Facebook tracks users' devices even when they are not connected to Facebook.

Zuckerberg: I'm not sure the answer to that question.

Zuckerberg: Yes. There may be some data that is necessary to provide the service that we do, but I don't have that, sitting here today, so that's something that I would want to follow up with you on.

In perhaps the most glaring example, Sen. Orrin Hatch, R-Utah, asked Zuckerberg, "How do you sustain a business model in which users don't pay for your service?"

Zuckerberg paused for a moment, seemingly surprised by the basic nature of the question, and said, "Senator, we run ads."

Public speaking does not come naturally to Zuckerberg

NBC reported that Zuckerberg prepared for his testimony by participating in four practice sessions. The New York Times reported that Facebook "hired a team of experts, including a former special assistant to President George W. Bush, to put Mr. Zuckerberg, 33, a cerebral coder who is uncomfortable speaking in public, through a crash course in humility and charm."

Zuckerberg did appear to be prepared, but he also appeared robotic, at times.

Zuckerberg said "there will always be a version of Facebook that is free" and "we don't offer an option today for people to pay to not show ads." The qualifiers in those statements - "version," "today" - suggest a future, ad-free version of Facebook could come with a subscription fee.

Facebook's chief operating officer, Sheryl Sandberg, said something similar to NBC last week: "We don't have an opt-out [of ads] at the highest level. That would be a paid product."

Sen. Ted Cruz, R-Texas, is going to be a Fox News hero

Yes, the focus of the hearing was user privacy. But, as I wrote Monday, some conservatives in the media hoped that Zuckerberg would be confronted about Facebook's alleged bias against right-leaning speech. Cruz delivered.

"There are a great many Americans who I think are deeply concerned that Facebook and other tech companies are engaged in a pervasive pattern of bias and political censorship," Cruz said.

"I understand where that concern is coming from because Facebook and the tech industry are located in Silicon Valley, which is an extremely left-leaning place," Zuckerberg replied. "And this is actually a concern that I have and that I try to root out in the company - is making sure that we don't have any bias in the work that we do, and I think it is a fair concern that people would wonder about."

Redmi Note 5 Pro Will Be Up for Pre-Orders via Mi.com on Friday at 12pm: Xiaomi
Facebook Shouldn't Be 'Too Big to Fail'