The Lenovo Smart Clock is table-top clock that you can talk to. 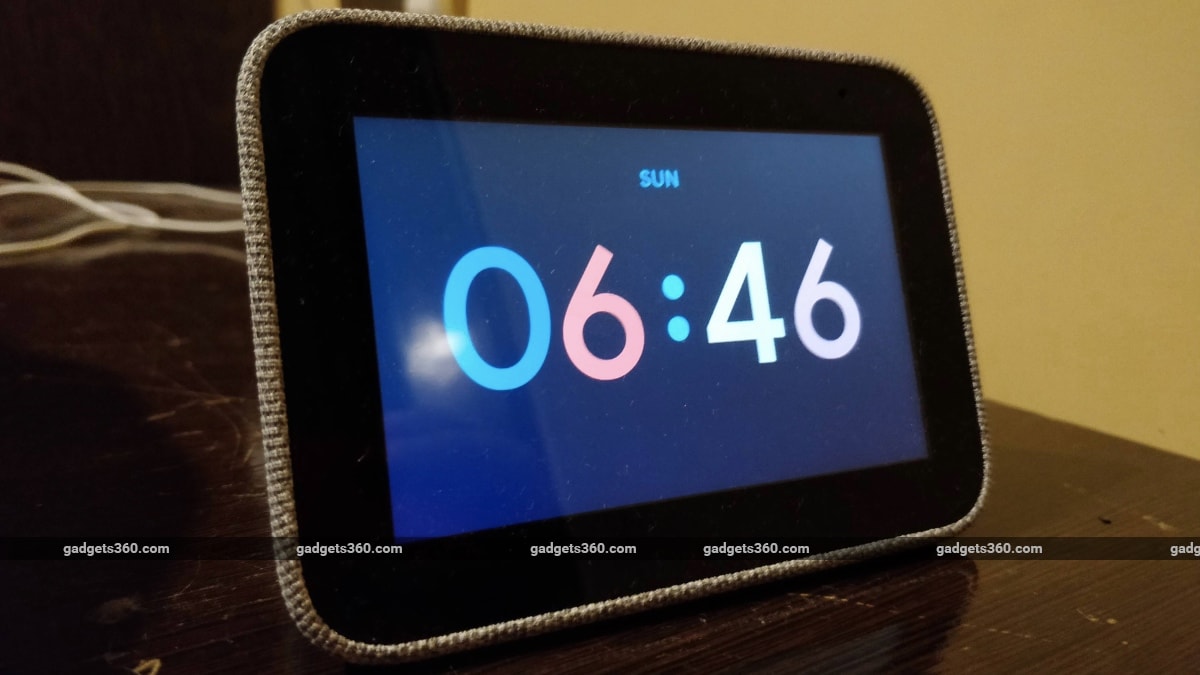 Lenovo is best known for its laptops and smartphones, but it also makes various other products including tablets and wearables. The latest product from the company brings Lenovo into a completely new segment — smart home devices. The Lenovo Smart Clock is priced at Rs. 5,999, and as the name suggests, it is a digital clock that doubles up as a smart speaker and display. The smart features are thanks to access to Google Assistant.

While there are plenty of smart speakers in the market, a smart clock is a somewhat new concept. This device competes with the recently launched Amazon Echo Show 5, offering the same functionality as a voice assistant with the benefits of a small screen. We've spent some time with the Lenovo Smart Clock, and here's our review.

The top, bottom, and sides are fabric-wrapped, with just two physical buttons — in the shape of plus and minus symbols — for the volume at the top. The bottom has rubber grips to keep the device securely in place on a tabletop. On the whole, we like the understated and clean appearance of the device, with the fabric exterior adding a bit of sophistication to a product that discreetly gets its job done.

The back of the Lenovo Smart Clock has a socket for the included power adapter, a sliding switch to turn off the microphones, and a USB Type-A port which can be used to charge devices such as smartphones and wireless headphones. The official website states that the sales package includes the power adapter to connect to a wall socket, and a USB cable, but only the former was in the box of our review unit.

The Lenovo Smart Clock has a 4-inch 800x480-pixel IPS touch screen, which serves as the core of the ‘clock' experience. Powering the device is a MediaTek 8167S processor, along with a single 3W speaker and two passive radiators for sound. For connectivity, the Lenovo Smart Clock supports Wi-Fi 802.11a/b/g/n/ac and Bluetooth 5.

While we've largely only seen Google Assistant on smart speakers from Google itself, such as the Google Home and Google Nest Hub, there are a handful of other manufacturers that make similar products. Lenovo also has the Rs. 14,999 Smart Display available alongside the Smart Clock in India, but the two function differently.

The smaller and more affordable Lenovo Smart Clock does have a screen, but doesn't have the same visual impact as the Lenovo Smart Display or Google Nest Hub. The small screen is largely meant to serve as a clock face. However, it does also show the weather, and allows you to track information and well as control media playback. You can also see directions for navigation, and pictures from your Google Photos library. You can swipe across the screen to cycle between the clock face, alarm controls, and music (when something is playing), and also adjust the brightness and other settings this way.

All of these use cases of the screen worked as expected, and the Lenovo Smart Clock was able to clearly hear and execute voice commands as long as we were close enough to the device. Naturally, you can also control other devices linked to your Google Assistant, and we were able to use ours to turn on a OnePlus TV and a Mi Air Purifier.

The device isn't capable of hearing and properly understanding voice commands from as far away as the Google Home can, but it is meant to be used as a tabletop or bedside clock that you'd typically use when in the immediate vicinity of it. As a clock, the device displays the time clearly, and you can choose between a handful of interesting and well-designed clock faces.

In terms of functionality, the Lenovo Smart Clock is just like as any other Google Assistant smart speaker, and can answer all kinds of questions and follow-ups. Think of this as a Google Home Mini, but with a small display that offers just a few more features than a regular smart speaker. As such, we were happy with its abilities to work as a smart speaker and basic smart display.

We had the device linked to a personal Google account, and we were able to stream music using YouTube Music and Spotify. The Lenovo Smart Clock doesn't have a very large speaker, but we were impressed with how loud it was; at the highest volume, it was loud enough to be heard clearly in a small room. As such, it is suitable for a bedroom, kitchen, or dining room.

Sound quality wasn't impressive, and we found the mid-range to be a bit too prominent and sharp. This is of course so that voice responses from Google Assistant can be heard clearly, but it does affect the device's ability to serve as a music player. Listening to Feels Like Summer by Childish Gambino, the bass was a bit dull while the upper mid-range and highs were a bit too harsh, leading to audible sibilance.

Naturally, since there's just one speaker, there's no stereo sound. The Lenovo Smart Clock might be fine for the occasional music track, but it's best not considered if you intend to actively use the device for music.

The Lenovo Smart Clock is best used exactly as its name suggests, that is, as a clock with some smart features. The implementation of Google Assistant is full-fledged, and the display can be used for a limited number of functions beyond showing the time. While it does work as a speaker for both streaming media and Bluetooth devices, sound quality isn't very good. It's also a bit expensive for what it offers, in our opinion.

If you're in the market for a new bedside alarm clock, it might be worth investing in the Lenovo Smart Clock for the additional smart functionality and capabilities it offers beyond being a clock. It's a good way to get onto the smart devices bandwagon, and even if you don't use that smart functionality a lot, it's still a functional and good-looking digital clock.