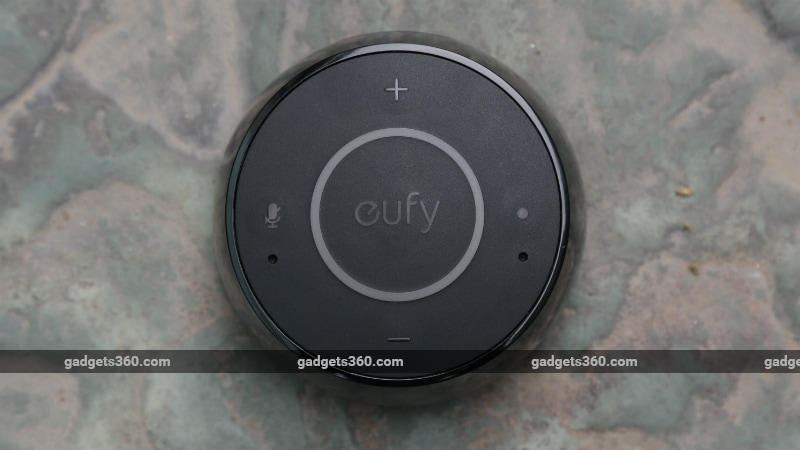 The Eufy Genie is an Amazon Echo Dot alternative that retails at Rs. 2,199

Eufy, a sub-brand of Anker, makes several smart home products such as smart light bulbs, smart switches, smart plugs, and even robot vacuum cleaners. The company has recently launched the Eufy Genie in India, which is a petite, puck-shaped device with far-field microphones that lets you harness the power of Amazon's Alexa voice assistant.

The Amazon Echo Dot alternative is officially priced at Rs. 4,999 but can be found for Rs. 2,199 online. Is the Genie a viable alternative to the Echo Dot? We have been putting it through its paces for the past few weeks, and here is what we think.

The design of this device is simple. While the Echo Dot has a utilitarian and no-nonsense design, the Genie adds some curves to the mix and has a more homely aesthetic. It is slightly larger than the Echo Dot, but the build quality is acceptable at best. The plastics feel chintzy, and something started rattling inside our unit within a few days of use.

There are four buttons on the top; two to control the volume, one to trigger Alexa manually, and one to mute the microphones for those who are worried about privacy. The buttons have little to no travel and are quite hard to press. There's also an LED ring, reminiscent of the one found on the Echo series of devices, which lights up blue when you activate Alexa and red when the device encounters an error.

Just like the Echo Dot and Google Home Mini, the Eufy Genie can be powered by a power bank thanks to the Micro-USB port at the back, right next to which is a 3.5mm auxiliary output jack that allows you to connect better-sounding speakers. The Eufy Genie, of course, comes with a bundled adapter and a Micro-USB cable.

Setting up the Eufy Genie is a straightforward affair. Just download the Eufy Home app from the Play Store or the App Store, enter your Wi-Fi password, sign in via your Amazon account, and you are good to go. On the other hand, you have to use two applications - the Alexa application and Eufy's own - to manage the device and change various settings, which does get annoying.

As the Genie is powered by Alexa, its capabilities are more or less exactly the same as other Alexa-powered devices like the Echo Dot. Alexa understands Indian accents well and also recognises Hindi, Tamil, Telugu, Kannada, Punjabi, and Malayalam proper nouns in English sentences.

Alexa may not be as context aware as Google Assistant but can handle tasks such as setting alarms, reading out the weather, suggesting restaurants based on cuisine and location, and answering trivia questions, with ease. Alexa can also play music on request via Amazon Music, Saavn, or TuneIn Radio, and read your Kindle Books aloud.

Alexa has a few nifty tricks up its sleeve. The first, called 'Flash Briefing', is a news bulletin of sorts that you can trigger at will. You can customise news sources within the Alexa application and change the order in which it reads them aloud. There is a 'Sports Update' as well, which works much the same way. You can track different sports as well as your favourite teams.

Then there are 'Skills' that allow you to expand Alexa's functionality. There are a multitude of skills on offer including ones for major services including Uber, Ola, Ixigo, GoIbibo, Freshmenu, Cleartrip, and UrbanClap. You can also buy products directly from Amazon via Alexa, which could come in handy in a pinch.

Siri vs Google Assistant vs Alexa: Which Is the Smartest Virtual Assistant in 2018?

The Genie can be used to play games too. At the time of writing, the Alexa application had 4,666 skills listed under the category of 'Games, Trivia & Accessories'. What mars the experience somewhat is the Genie's slow response time, which makes playing turn-based games slow and trying. The Echo Dot, in comparison, is much snappier.

The Eufy Genie did not support Alexa messaging and calling initially but a recent software update has added that feature. We were able to call and message our Alexa contacts without any issue whatsoever. The Genie and all third-party Alexa devices originally lacked a feature called Echo Spatial Perception, which allows only the closest Alexa enabled device to respond to voice commands. Amazon has now moved ESP to the cloud, allowing any third-party Alexa device, including the Eufy Genie, to take advantage of its functionality, which should help if you have multiple Alexa-powered devices in your house.

The Genie is meant to be the voice command centre for all of Eufy's smart products, but they are compatible with both Alexa and Google Assistant. Alexa-compatible smart home products made by Syska, Oakter, TP-Link, D-Link, LIFX, and Philips are also supported.

While the Echo Dot allows you to change its wake up command to "Echo", "Amazon", or "Computer", the Genie is stuck with "Alexa". The Genie is also slow to respond to commands, when compared to the Echo Dot, and often just gives up altogether.

Although the 2W speaker in the Genie is more powerful than the one found on the Echo Dot, it is still not cut out for anything other than podcasts and voice commands. Listening to music is quite an unpleasant experience. Bass is thin and weak, and mids are heavily suppressed.

There is a 3.5mm output to connect better speakers, but Bluetooth connectivity is missing. The lack of Bluetooth is a major annoyance as many portable speakers these days are fully wireless and don't even have auxiliary inputs.

The Eufy Genie does not support Amazon's multi-room audio feature, which lets you play music on multiple Alexa devices at the same time, as long as they are connected to the same network. The Genie also does not support the 5GHz Wi-Fi band, which is supported by the Echo Dot.

While the Echo Dot has seven far-field microphones, the Eufy Genie makes do with two. As a result, the Genie struggles to pick up voices from across any room. In our experience, we had to shout at the Genie to register any command while it was playing music at full volume. This issue got even worse when the Genie was connected to larger speakers.

Verdict
The Genie is not a bad product per se and would make for a decent buy if the Echo Dot did not exist. The Genie lacks Bluetooth connectivity, needs two applications to control all its settings, and has just two microphones compared to seven on the Echo Dot. The Genie's built-in speaker is slightly more powerful but is still not cut out for music.

The Eufy Genie is cheaper than the Echo Dot but is compromised in many ways. We suggest you spend the extra money and buy the Dot, which is a far more capable and versatile product. The Echo Dot is priced at around Rs. 4,000 but is often available at around Rs. 2,500, which makes it a no brainer over the Eufy Genie at that price.