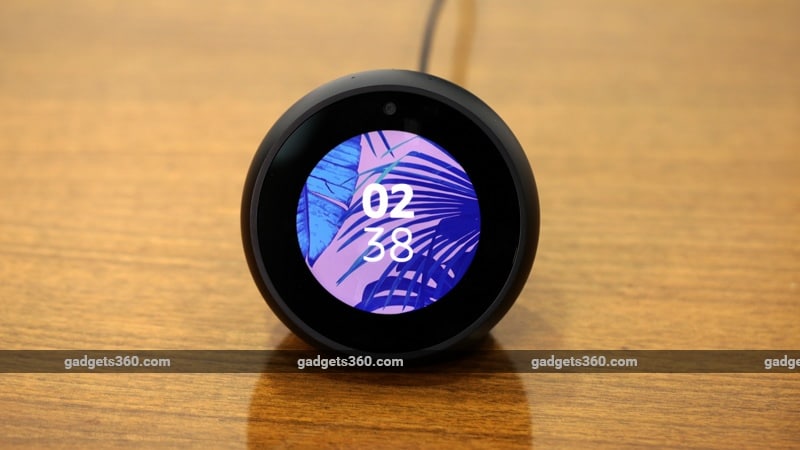 Virtual assistants can have a place in our lives, helping us with information and getting small tasks done. While many people might be familiar with the voice assistants on their smartphones, we are now starting to see standalone devices such as the Amazon Echo lineup and Google Home devices launching in India. Amazon already had a headstart with three of its devices in the market, and now it has launched yet another one called the Amazon Echo Spot. It stands out from other offerings in the market since it's the only one with a display. But is that distinction enough to make it your first choice? We find out.

For starters, the Echo Spot is the first Alexa-powered Echo device with a display to launch in India. The design is different from the cylindrical Echo devices we have seen in the past. The Echo Spot has a round body on which the display is placed at an angle. It isn't very heavy at 419g, but is heavier than the Echo Dot. Since the device will be sitting on a table most of the time it has a rubber pad at the base to ensure it doesn't slide about. In terms of pricing, at Rs 12,999, it slots right in between the Amazon Echo and Echo Plus.

The circular 2.5-inch display on the Echo Spot has a resolution of 480x480 pixels. It has good viewing angles and we could read from it while sitting down or standing. There's a camera right above the display, which can be used for video calling. At the top, it has an array of four microphones which helps the device capture commands really well. There are also volume up and down buttons, and a another button that disables all the mics and the camera. The Echo Spot has two ports at the back, one is a power inlet and the other is a 3.5mm audio output. Amazon supplies a 15W mains adapter and it will need to be plugged in at all times.

Unlike other Amazon Echo devices in India, you won't need a smartphone to set this one up because you can use its own touchscreen. The process is easy and requires you to log in with your Amazon account. You can also use the Amazon Alexa app on your Android or iOS device to do so. Like other Echo devices, Alexa, Amazon's assistant, is running the show on the Echo Spot. You can say "Alexa" to wake the device up, followed by any command. However, you cannot trigger Alexa via the screen. Amazon says that it still wants people to interact with the device primarily using their voices, and the display is only to help them get used to that.

Amazon claims that it uses far-field technology to help the Echo Spot hear your commands. If you have more than one Echo device, it uses something Amazon calls Echo Spatial Perception so that the closest one responds. We tried this using the Echo Spot and an Echo Plus, and found that it worked most of the time. Recognition on the Echo Spot is good enough that it can pick up the Alexa hotphrase even when it is blasting music.

In use, we found that the device is quick to pick up the hotphrase, and voice recognition is quite good. Depending on the quality of your Wi-Fi or Internet connection, however, you might find that Alexa's responses to commands and questions are a bit laggy.

Alexa is as good as it is on any other Echo device. You can ask it to play songs, set alarms with the music of your choice, and much more. Since the Echo Spot has a display, you get visual feedback along with audio. If it is replying to you, the same thing is visible on the display as text for you to read. It also shows images or videos if it thinks they are relevant to your query.

When idle, the display shows a clock face by default and also shuffles between the current weather, trending stories, and suggested things to try with Alexa. You can trigger Alexa and say "Tell me more" if you want to know more about a story, but if you find this feature distracting, you can disable trending topics and weather updates, and also prevent the display from shuffling. You can change the clock face, and Amazon offers multiple themes and options. You can also use your own photos as the clock face by uploading them through the Amazon Alexa app.

The display is useful if you haven't used a smart speaker before, as you get visual cues about what the device is doing. You can search for things to buy from Amazon with a voice command, and the Echo Spot will show photos of your search results along with ratings and seller information. You can also add things to your cart or buy them straightaway.

You can add skills which let Alexa play games, book cabs via Ola and Uber, and control home automation products. Amazon sent us a Syska Smartlight LED bulb to use during our tests, and it could be controlled using just our voice with a little bit of help from Alexa. For certain skills like News, the Echo Spot can play video clips in response to your commands, but it might take a few seconds for them to load and they run letterboxed on the circular screen. You can zoom in to make use of the full display but everything in the corners will be lost, which isn't ideal. Since the Echo Spot is compatible with all existing Alexa skills, users have a wide range of options to choose from.

Amazon Echo vs Google Home: Which Smart Speaker Is Made for India?

The other feature that makes the Echo Spot different is its camera, which can be used to make video calls to other Alexa users. If the person you are calling has an Echo Spot, they will be able to answer the call on it directly. Those using an Echo device without a camera and screen will receive video calls on their smartphones via the Alexa app. At the moment, other apps are not supported. We found that since the camera is set at an angle just like the display, framing your face for a video call can be a little tricky. If you are planning to use this functionality often, Amazon also sells an adjustable stand which might come in handy.

While the always-listening microphones and the camera may raise privacy concerns, you can disable them whenever you want. Press the button on the top and it lights up in red. A red outline will appear on the screen for some time, and after that there will only be a tiny status icon on the screen. We found it hard to figure out when the Echo Spot was or wasn't able to respond to commands from a distance, and we prefer the red ring on other Echo devices which is easier to spot.

Audio playback on the Echo Spot uses a bottom-firing speaker. It is loud enough to fill a medium-sized room, but the audio could do with some more bass. It sounds tinny compared to the Echo and Echo Plus, and is easily outclassed by similarly priced Bluetooth speakers. If audio quality is a priority, the Echo Spot will disappoint you. It can perform as a decent bedside Alexa device, but it isn't like the other Echo devices in terms of being a smart speaker.

Verdict
With the Echo Spot, Amazon has added a new dimension to interacting with a digital assistant. While voice is still the primary interface, visual feedback can make it more versatile. The device is also well built and would look at home on a work desk or a bedside table.

Its camera could be useful for making video calls, but it is limited only to other people using Echo devices or the Amazon Alexa app. Audio quality isn't great, and this device falls behind the Echo and the Echo Plus. If you like the idea of the display and are planning to put the camera to use, you could go for the Echo Spot. Otherwise, the Amazon Echo costs Rs. 2,500 less, which lets you save some money for smart lights and switches for home automation.