Mi Smart LED Bulb (B22) is priced in India at Rs. 799 and can be purchased from the Mi India online store. 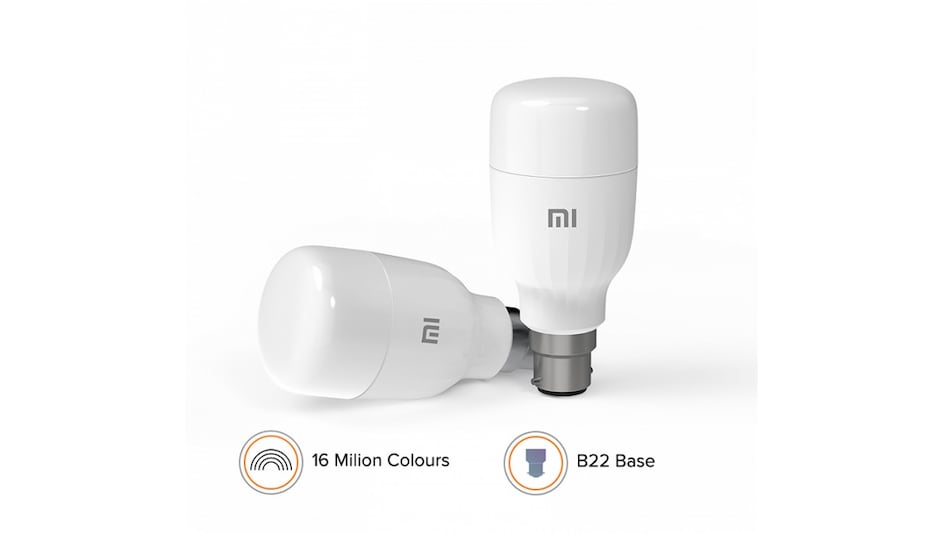 Mi Smart LED Bulb (B22) has been launched in India as part of Xiaomi's lineup of smart home appliances. The smart LED bulb, as the name suggests, fits the commonly used B22 bulb socket and is made from polycarbonate and plastic clad aluminium. It can produce 16 million colours and can be controlled through a mobile app. The Mi Smart LED Bulb (B22) also works with voice assistants like Google and Alexa. Xiaomi says it has been designed to distribute heat evenly, ensuring the bulb's long life.

The Mi Smart LED Bulb (B22) is priced at Rs. 799 and has a white body. It can be purchased from the Mi online store.

The Mi Smart LED Bulb (B22) has a rated power of 9W and offers 950 lumens of brightness. It uses the standard B22 base type. Xiaomi says the bulb has a life span of approximately 25,000 hours. The rated input on the Mi Smart LED Bulb is 220V to 240V at 0.07A. The bulb itself has been made from polycarbonate and plastic clad aluminium.

It can produce 16 million colours and you can choose your favourite hue using the Mi Home app available on Android and iOS. The adjustment range for colour temperature is between 1,700K and 6,500K. The Mi Smart LED Bulb (B22) uses Wi-Fi 802.11 b/g/n to connect with the mobile app. The smart bulb can also be controlled using Google or Alexa voice assistants.

Xiaomi has another smart bulb in its portfolio – Mi LED Wi-Fi Smart Bulb. It has a power rating of 10W, offers 800 lumens of brightness, and has nearly the same features as the Mi Smart LED Bulb (B22), but is offered with an E27 base connection. At Rs. 1,299, it also costs more than the newly released smart bulb.