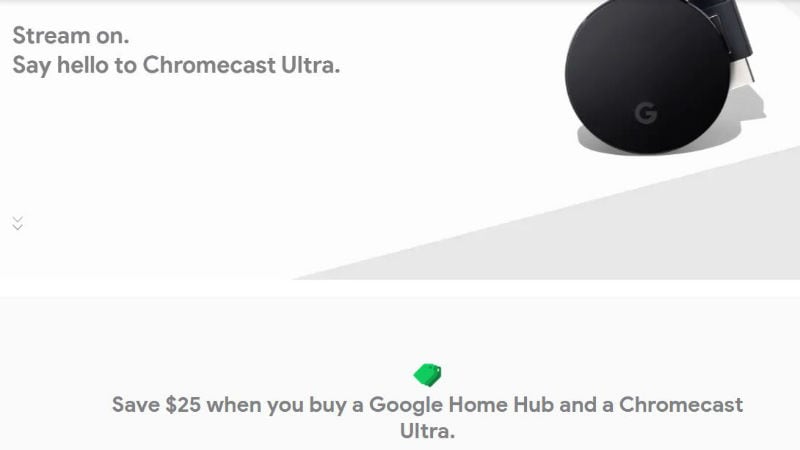 Google will kick off its third annual 'Made by Google' hardware event today and it may or may not have a few surprises up its sleeve. A huge number of leaks over the last few months have already hinted at the products that the tech giant will unveil on Tuesday. Of course, new flagship handsets in the company's Pixel lineup - Pixel 3 and Pixel 3 XL - will get launched. Among other things, we will likely see the Google Home Hub, an Amazon Echo Show-like smart display powered by the Google Assistant. Meanwhile, Google seems to have prematurely confirmed the presence of this unannounced device.

With the launch of Home Hub, Google is expected to be looking to expand its Home smart speaker portfolio. First spotted by Android Police, Google has posted a promo of the Home Hub on the Google Store in the US. With the new promo, it is confirmed that the Google Home Hub will soon be available either for order or pre-order. However, buyers will be able to shave $25 (roughly Rs. 1,900) off the price if they purchase the device with a Chromecast Ultra.

To recall, the Chromecast Ultra is a video streaming dongle that was launched by Google in 2016 as a successor to Chromecast. It was launched with a price tag of $69 (roughly Rs. 5,100) but now buyers will be able to avail an extra discount if they buy it with the Google Home Hub. Notably, this is the only mention of Google Home Hub on the Google Store and there are no additional details available at the moment.

As per previous reports, the Google Home Hub will be priced very aggressively at $149 (roughly Rs. 10,800), cheaper than the Lenovo Smart Display and JBL Link View. It may sport a 7-inch display with touchscreen capabilities and a reasonably large speaker. It is expected to come with a tablet-shaped LCD display will be driven by a scaled-down Google Assistant interface.